On Thursday, January 28, Planned Parenthood Gulf Coast will celebrate the 43rd anniversary of Roe v. Wade, the tragic Supreme Court decision that paved the way for the legal killing of nearly 60 million preborn children in America.

In an email to supporters on January 15, Planned Parenthood Gulf Coast – the abortion affiliate caught selling “intact fetal cadavers” as a “matter of line items” to undercover journalists posing as tissue procurement agents – promoted their upcoming, donor-sponsored fundraiser luncheon at the Westin Galleria Hotel in Houston.  The Solis family will sponsor the “2016 Roe v. Wade Luncheon.” 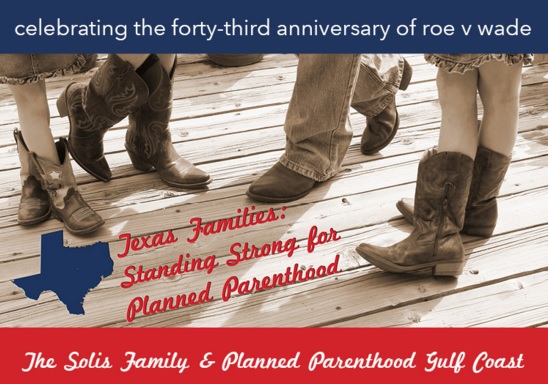 Thanks to Roe v. Wade (and Doe v. Bolton, a SCOTUS ruling that quickly followed Roe v. Wade in 1973 to expand the “right” to kill preborn children through all nine months of pregnancy), Planned Parenthood has become one of the most lucrative, federally-funded “nonprofit” organizations in America.  In fact, Planned Parenthood has rounded out every fiscal year with tens of millions in excess revenue every year for the last decade.  Excess revenue.  Also known as: profit.

Indeed, in 2014, Planned Parenthood raked in nearly a billion dollars (yes, billion with a b) in private and government contributions over and above the income derived from product sales at their hundreds of clinics and abortion mills across the country.  In the same year, Planned Parenthood also reported a record-breaking surplus profit of $127.1M.

The record shows that Planned Parenthood’s priority is profit.  No matter what.