You are at:Home»News»Issues»Abortion»Vitriolic anti-Life protesters at SCOTUS a stark contrast to peaceful Pro-Lifers

On Wednesday, two factions rallied at the steps of the Supreme Court building in Washington, D.C., prior to opening arguments in the case of Whole Women’s Health v. Hellerstedt, which is addressing the constitutionality of certain provisions of the Texas Pro-Life Omnibus Bill, HB 2.

The event drew dichotomous groups similar to what we saw in Austin when HB 2 was passed in the summer of 2013.  For their part, volatile abortion activists spewed misinformation and hate speech toward Pro-Lifers and the Pro-Life law.  But the ever-peaceful Pro-Life advocates in attendance enacted their strategy of prayer and unity and did not engage the vitriolic opposition.

A key difference between the two groups was the manner in which each advanced their cause. Pro-Lifers came to the Supreme Court with a united message: protect them both.  They rallied in unison and implemented a tried-and-true strategy of prayer and witness for Life. And when rabid anti-Life protesters tried to break through our ranks and destroy the platform we gave to the Pro-Life speakers and Congressmen leading the rally, Pro-Life solidarity was redoubled as demonstrators locked arms to protect their right to free speech. 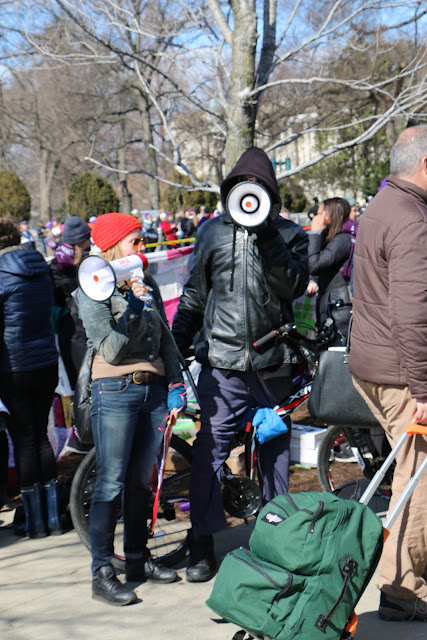 Indeed, chaotic is the only way to describe the anti-Life demonstration and the nature of their message. Their piecemeal event highlighted the division and animosity on which their movement stands; wildly outlandish signs brought to the event by anti-Life activists testify to the disunity of their message and belie the myths upon which their opposition is based. Furthermore, when pressed, anti-Life advocates proved that they did not actually understand the fundamental provisions of HB 2, revealing that they were engaged in battle against an illusory “attack on women’s rights.” 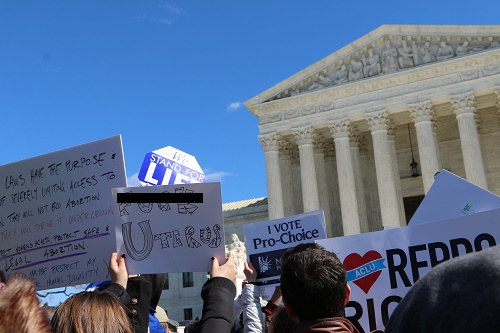 And this makes sense, because the anti-Life faction was largely paid to demonstrate in order to provide the illusion that they are a powerful grassroots voice, when, in reality, no real grassroots abortion movement exists. In fact, national anti-Life lobby groups spent months fundraising to send protesters from around the country “on a road trip” to Washington for the event. On top of sending buses full of anti-Life advocates to the event for free, they also paid people $11-$15 per hour to show up at SCOTUS and stand with opponents of HB 2: 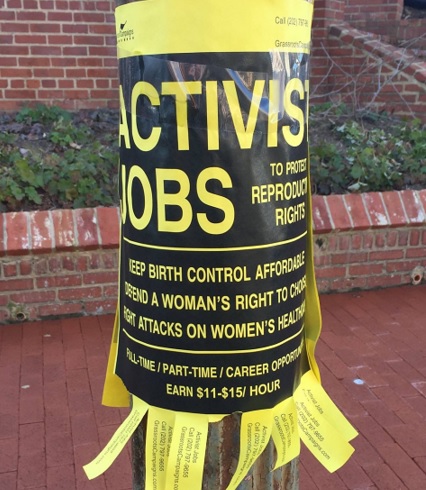 Let’s not underestimate money’s influence over the abortion movement at-large – from the protesters to the abortionists and everyone in-between – money is paramount. At the Pro-Life rally, Representative Jim Jordan insightfully shared that Pro-Lifers, on the other hand, are people of integrity: “I deal with lobbyists all the time. They come talk to us because they want to influence things; they want to influence policy because there’s money at stake. You are the only group that’s involved in public policy not because there’s money at stake, but because you want to do the right thing. You want to protect the sanctity of Life and the sanctity of women, and for that you should be commended.”

Pro-Lifers are skilled at demonstrating our views effectively, because over a million of us rally every single January all over the country on the anniversary of Roe v. Wade. Most notably, the March for Life in D.C. draws crowds in the high-100,000s. Abortion zealots will never achieve a feat like this, not only because they lack any significant number of impassioned grassroots supporters, but also because their movement lacks the unity necessary to effect a demonstration of that caliber. 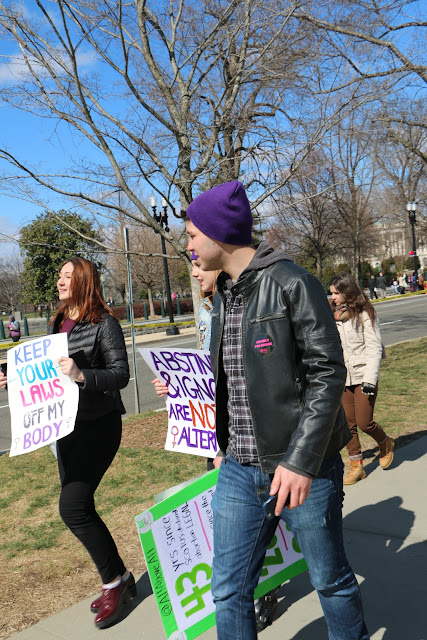 So, with a Pro-Life faction united in mission, bold in voice, we were unflappable under the extreme verbal and physical attacks sustained on Wednesday. Although our numbers were dwarfed by those of paid stage actors standing against Life, we conveyed the unanimous message that we stand for LIFE: We stand to protect women and their children from the deceit of Big Abortion. Anti-Life demonstrators insulted, pushed, shoved, trampled, and bullied Pro-Lifers because violence and chaos are the principles on which they stand as advocates of abortion on-demand. Pro-Life leaders, rally speakers, and grassroots advocates held their ground in the face of evil and held back the voices of darkness from the High Court’s inner sanctum of Truth with peaceful, prayerful, fearless witness.