Should whether or not a baby is “wanted” before he or she is conceived determine his or her Right to Life?  This is the position of the abortion industry, which markets elective abortion on-demand to thousands of American mothers every single day.  Every child a wanted child, they say, leaving out the fact that the so-called “unwanted” child becomes collateral damage of a discriminatory mindset in which the will of bigger, stronger people takes paramountcy to the fundamental human rights of smaller, defenseless people.

First, the idea that there are children who are unwanted is a lie propagated by anti-Life zealots to promote a framework in which abortion is seen as not just a choice, but a necessity and a good.  In New York City, for example, parents facing unexpected pregnancies in 2013 faced a barrage of state-funded abortion propaganda: 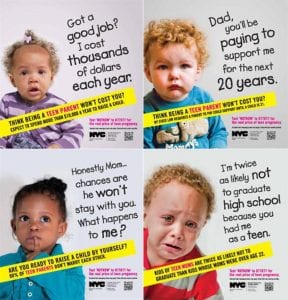 Make no mistake: this kind of fear-mongering toward parents in need of support and empowerment is a form of unjust coercion into abortion – all at the service of death.  This is Planned Parenthood founder Margaret Sanger’s dream come true.

Indeed, the position that a child’s life can legally and acceptably be destroyed because human beings who are physically more powerful than the child can end his life is a horrifying reflection of where we as a society stand on the scale of civilized to draconian.  The horror is further compounded when we consider the methods used to by these bigger, stronger people to obliterate the lives of the children who can do nothing to defend themselves, but have received a death sentence simply for being discriminatorily labeled “unwanted”:

If a child is “wanted,” however, a host of legal protections are in place.  The father of the child is legally bound to support him or her.  Pharmaceutical companies must warn pregnant women of potential dangers their products can have on a developing child in utero.  Babies undergoing prenatal surgery receive anesthesia so that they do not feel the excruciating pain of being cut.

Last year, Pro-Life Senator Marco Rubio pointed to the debasement of civilization effected by the American abortion culture.  “[F]uture generations will look back at this time in history,” said Rubio, “and say it’s really unbelievable that so many unborn human beings, their lives were ended, simply because they didn’t have a birth certificate, couldn’t hire a lawyer, didn’t vote, or we couldn’t see them yet.”

Once born, the law does not permit parents to end their children’s lives because the parent does not “want” the child.  To do so is considered murder – and there are parents in prison for such crimes today.  But abortion logic is a subversion of reality, upending moral truths and replacing them with lies.  The lie of the abortion industry is that preborn children do not have intrinsic value – that his or her value stems absolutely from whether or not he or she is wanted by parents.

There is a simple way to determine whether or not this position is just, and that is to apply the universal principle of equity.  Christians call this principle the “Golden rule” – do unto others as you would have them do unto you.  If someone in our own life ceases to “want” us around them, does he or she gain a right to kill us?  If not, we have to ask ourselves how we can, as a society, apply this fatal criterion to the most innocent members of the human family?