You are at:Home»News»Issues»Abortion»The dangerous fallacy of a utilitarian view of life
Reading Time: 5 minutes

As testing procedures have improved over the years, prenatal diagnoses of abnormalities in unborn children have increasingly been used as a justification for abortion.  Recently, reports surfaced of countries, such as Iceland, boasting that 100% of preborn babies diagnosed with Down syndrome are aborted, with Denmark following close behind and the United Kingdom at 90%.  Currently in Texas, in no small part due to the actions of Byron Cook (R-Corsicana), even late-term abortions can still be committed in cases of alleged fetal abnormalities.

These startling statistics are the result of a culture that does not value Life, but instead views the issue through a utilitarian lens.  The mentality that promotes the culling of genetic abnormalities from the human population through abortion is built on the same framework as the early eugenics movement, from which the modern abortion industry stems.  If a genetic abnormality is warrant enough for the ending of a life, what other “undesirable traits” fit this standard?  Race?  Gender?  Family history?

Because this utilitarian view of Life permeates society, parents of preborn children with abnormalities are often pressured into abortion.  Whether by appeal to apparent authority of a doctor suggesting that abortion is the best route or pressure from family and friends, parents are often persuaded to ignore the dignity of every human life in such situations.

Lauren Hanyka’s mother was 36 years old when she became pregnant.  Due to her age, the doctors ran genetic tests approximately 16 weeks into the pregnancy.  Of the three tests, two returned abnormal.  The doctors told Lauren’s mother that her baby was missing half a chromosome and therefore recommended abortion.

Though the doctors never specifically mentioned Turner syndrome, this is the genetic abnormality most often associated with missing all or part of an X chromosome.  About 99% of pregnancies with Turner syndrome babies result in miscarriages or stillbirths.  Babies who do survive live with a number of physical ailments, such as a webbed neck, short stature, sterility, and problems with vision, thyroid function, and the cardiovascular system.

According to Genetics in Medicine, the official journal of the American College of Medical Genetics and Genomics, 76% of prenatal diagnoses of Turner syndrome result in an abortion.  But despite the pressure from the doctors, Lauren’s parents rejected abortion.  Her parents are strong believers in the Right to Life and, in their eyes, the value of their daughter’s life could not be influenced by any abnormalities.

Lauren Hanyka was born a perfectly healthy baby without Turner syndrome or any defects.  She is now 31 years old and living normally and happily.  But 31 years ago, doctors were convinced that the best option for her life – and her mother’s – would be death by abortion. 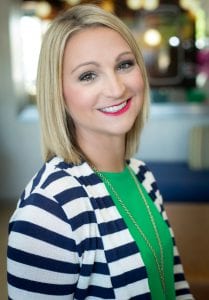 “It honestly makes me sad that the doctors’ first response was to get rid of me like I was nothing but a defect,” Lauren says.  “We are talking about a human life, and it’s a little surreal that they would so casually recommend abortion.”

Lauren says she recalls hearing that in 1986, there were 25 cases like hers.  Eighteen of these babies, she says, were aborted.

“I have never believed in abortion.  To me, it is extremely saddening that such an inhumane practice takes place every day, and so many parents end up listening to the advice of their doctors regarding abortion.”

Lauren believes that all human Life, regardless of any abnormalities, is precious and equal.  “The first thing I think about when I consider that I might have been aborted is all the lives I would not have gotten to make an impact on.  Because to me, that is where the miracle of life is so evident.  We all impact other people’s lives, no matter who we are.  And no one should be able to decide that someone’s life will not be impactful and can therefore be taken away.  My parents chose life.  I didn’t have the option to say ‘hey, hey doctors!  I want to live!  I am going to be spontaneous and happy and quirky and fun and funny.  You can’t see that, but please don’t recommend my parents kill me!’  I didn’t have that voice.  But thankfully, my parents did and they spoke up for the baby who didn’t have a voice to speak up for herself.”

Indeed, no one should be able to decide that someone else’s life, regardless of any fetal abnormalities, is not worth living.  Sadly, some of our Texas state representatives think otherwise.  In advocating for the legality of late-term abortions for unborn children with disabilities such as Turner and Down syndromes, Byron Cook (R-Corsicana) told the House Floor in May 2017 that we “shouldn’t play God” by allowing these children to live.  Similarly, Ernest Bailes (R-Shepherd) stated on the same vote that due to the “dire consequences” of some disabilities, he “cannot in good faith dictate to another individual how they should cope with a scenario of such imminent peril.”  Clearly, however, he is comfortable dictating to other individuals how they should cope, as long as that individual is a preborn child.

Stories like Lauren’s encourage society to reconsider basing the value of someone’s life on the results of prenatal testing.  Lauren’s test results were false, and she was born healthy.  We may empathize with Lauren’s story, but remember that the Right to Life is not dependent on tests being wrong.  Independent of circumstances, preborn children have a Right to Life.

Icelandic photographer Sigga Ella once heard a discussion on a radio program about the ethics of prenatal testing.  This caused her to think more deeply about people with genetic abnormalities like Down syndrome, such as her Aunt Begga.  “Where are we headed?” she says she asked herself.  “It is very difficult for me to think of the elimination of Down syndrome and [my Aunt Begga]at the same time.”  She then embarked on a project to take portraits of people living with Down syndrome.  The result is a beautiful illustration of the humanity and dignity of those who are specifically targeted for abortion, especially in Ella’s home country.

You can see the project here.