You are at:Home»News»Texas Right to Life grieves death of founder and president, Dr. Joseph Graham

Dr. Joseph Martin Graham, who taught philosophy for forty-two years at the University of St. Thomas, was a founding father of the Pro-Life movement and current president of Texas Right to Life, and he was a loving husband, father, grandfather, and mentor.  The Lord blessed this weary warrior for the Kingdom with a peaceful death at home in his sleep in Houston on July 22nd at the age of 88.

“Few, if any, professors have made as major contribution to the University of St. Thomas and to the Catholic Church as Dr. Joseph Graham.  He taught and inspired his students in the classroom while saving countless lives with his Pro-Life ministry.  Joe Graham was a model leader of faith and character whose love for all will live on in the careers of those he educated and through the lives of those he protected,” said Dr. Robert Ivany, President of the University of St Thomas.

Upon earning his doctorate, Dr. Graham taught at Assumption University from 1959-1965 and Stonehill College from 1965-1970.  He taught at the University of St. Thomas in Houston from 1970-2012.  He boldly and fearlessly taught Thomistic objective realism throughout his career, believing that reality and truth are knowable by the unaided human intellect and that morality is universal and dictated by the precepts of reason in a post-modern world that has abandoned truth and morality.

Dr. Graham was a founding Board member of the Fellowship for Catholic Scholars and the President of the Houston chapter of Catholics United for the Faith.

Recognizing that every human being has infinite worth and dignity from the moment of fertilization until natural death, Dr. Graham’s true passion was his position as a founding member of Texas Right to Life, serving as the Texas delegate on the board of National Right to Life.  Becoming President in 1990, Dr. Graham grew Texas Right to Life from humble origins to the premier Pro-Life organization of Texas and then into the largest Pro-Life group in the South. 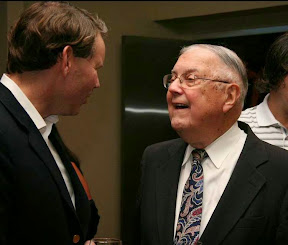 Dr. Graham had a special affection and concern for those whose lives were threatened by the deadly denial-of-treatment laws and futile care policies in Texas, regardless of the age, disability, or circumstances of the ailing.  Fighting this intensifying battle took Dr. Graham to Austin, Washington, D.C., and Rome, Italy, where his philosophical writings and principles were studied and used by many including Popes John Paul II and Benedict XVI.
Today, thanks to Dr. Graham, Texas Right to Life is a multi-faceted organization that has played an indispensable role in saving hundreds of thousands of innocent human lives in Texas and beyond.
Last year, the college scholarship program was renamed the Dr. Joseph Graham Fellowship for College Pro-Life leaders with 64 recipients active on 21 different campuses across Texas.

As a professor, Dr. Graham showed an indiscriminate kindness and sense of humor, which were hallmarks of every single interaction with each student.  Through the years, dozens of students would lean on Dr. Graham for sage advice and wisdom, and Dr. Graham was more than happy to oblige.  Indeed, his heart would delight to receive one of the countless letters from a former student letting Dr. Graham know about the positive influence that he had on their lives.

This same infinite kindness, intelligence, and humor made Dr. Graham a terrific father to his four children and grandfather to five.  Dr. Graham loved to sing, dance, tell jokes, travel, and attend every sporting event played by his children, and later, his grandchildren.  As the various trophies attest, Dr. Graham was a tremendous skier, bowler, bridge player, and golfer in his youth.  But Dr. Graham put those pursuits aside to focus on raising his family.  And his “family” did not just include his children.  Many friends of his children and young and old professors alike would visit and listen to Dr. Graham talk about the important matters, learn about their lives, and help steer them in the right direction.  Years later, Dr. Graham would always inquire with a keen memory and genuine interest in how each was doing.

Dr. Graham is survived by his wife of fifty years, Mary Joan.  He is also survived by his son, Jim (Executive Director of Texas Right to Life), and his wife, Elizabeth (Director of Texas Right to Life); daughter, Mary Angela Meyer, her husband, Jeff, and their two daughters, Clare and Mary Grace; son, Joe Graham, Jr.; and his daughter, Therese Andersen, her husband, Ric, and their children, Michael, Emily, and Catherine.

The funeral and Mass of Christian Burial was held on Friday, July 25, 2014 at Holy Rosary Catholic Church in Houston.  He is buried at Glenwood Cemetery in Houston.

We mourn the loss of a faithful husband, loving father and grandfather, passionate teacher, ardent protector of innocent human life, and true friend to many, yet we rejoice in the knowledge that Dr. Joe Graham is now receiving his eternal reward.

Dr. Joe Graham, you will be missed by many and never replaced or forgotten.

Eternal rest grant unto Dr. Joseph Graham, O Lord, and let perpetual light shine upon him.  May his soul and the souls of all the faithful departed rest in peace.