Texas Christian University’s History department is under fire by Pro-Lifers across the country for working on behalf of Planned Parenthood Greater Texas to find a student researcher for the organization.  In an email to students from the TCU History department, a project for Planned Parenthood was advertised as a vehicle for earning college credit or fodder for class research.

The project is evidently an attempt by Planned Parenthood to frame the abortion conglomerate as a pillar of the community and an historic fixture of Texas.  Ultimately Planned Parenthood of Greater Texas hopes that the “volunteer historian” will assemble a 5-10 minute presentation to be shown to “other groups and organizations in Fort Worth.” 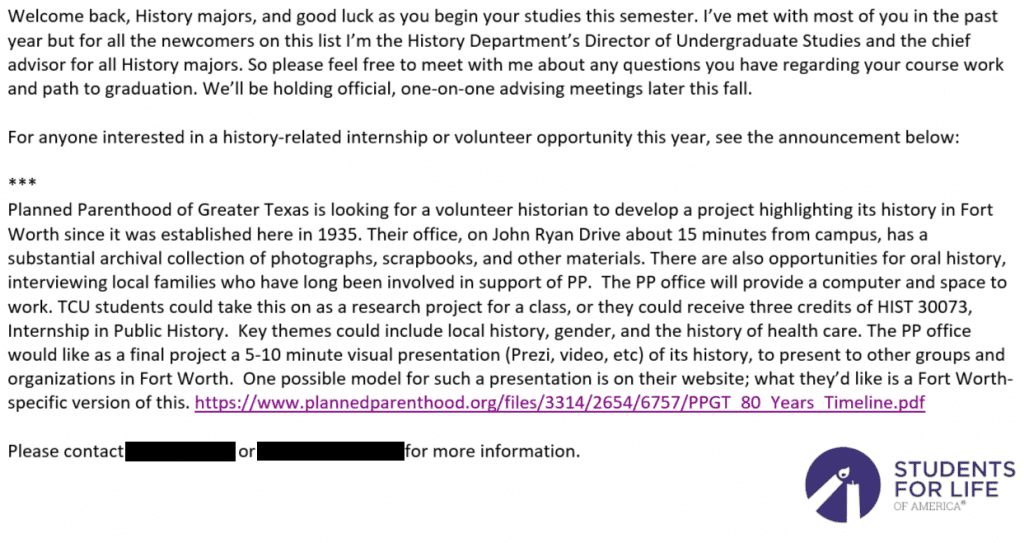 Planned Parenthood, the email says, will provide the space and tools needed to complete the project at their facility.  The tradeoff for the student’s time?  “TCU students could take this on as a research project for class, or they could receive three credits of HIST 30073, Internship in Public History.”

You might remember hearing about Planned Parenthood Greater Texas in the Pro-Life circuit recently.  That’s because the abortionist at the Greater Texas affiliate’s Austin location admitted to undercover investigators from the Center for Medical Progress that one of her medical goals was to be able to decapitate a baby and remove his or her head from the womb with no crushing.