You are at:Home»News»Issues»Abortion»Stop the Planned Parenthood Whack-A-Mole Game

Last week, a US District Court in Austin held a heated hearing about Texas’s move to cut Planned Parenthood from Medicaid.  Texas Right to Life observed carefully all three days of arguing and debating whether Planned Parenthood has disqualified themselves from the Medicaid program and if the Texas Health and Human Services Commission (HHSC) is justified in terminating their $3.1 million contract.  However, Pro-Life advocates and the Texas Legislature do not have to wait for this drawn-out lawsuit to be settled before continuing to defund Planned Parenthood.

Texas Right to Life has independently confirmed that in the last fiscal year (FY 2016), Texas paid the abortion business, Planned Parenthood, more than $517,000 from taxpayers’ pockets.  Last year, three Planned Parenthood affiliates in Texas (Planned Parenthood Gulf Coast, Planned Parenthood of Greater Texas, and Planned Parenthood of the Texas Capitol Region) received money from four different state agencies.  The largest payments came from the Texas Department of Assistive and Rehabilitative Services and the Texas Department of State Health Services (See chart below).  Although this is significantly less than the $3.1 million currently up for debate in the Medicaid lawsuit, this discovery is scandalizing because many state politicians have claimed to have already done everything possible to keep taxpayer money out of the abortion industry.  Our Texas Right to Life legislative team has found and confirmed this is not accurate. 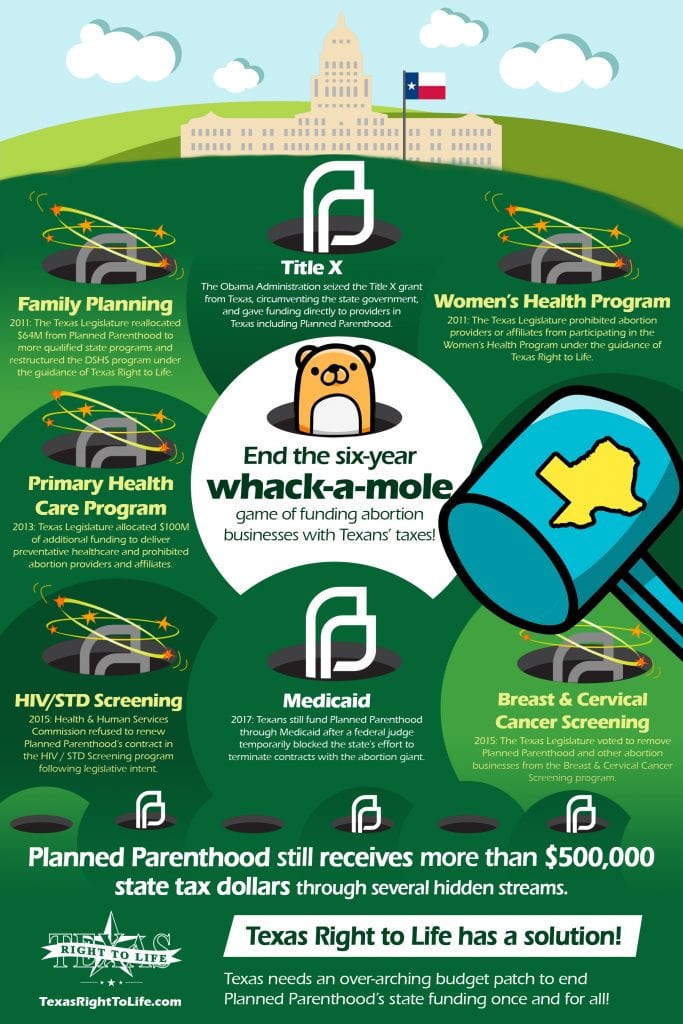 Since 2009, Texas Right to Life has led the effort to stop the taxpayer funding of Planned Parenthood and other abortion affiliates, and there have been many great victories.  In 2011, several Family Planning Programs were restructured and funding was redirected to ensure abortion businesses and promoters would not benefit from the Texas state budget.  New rules were adopted for the Women’s Health Program disqualifying Planned Parenthood and other abortion businesses.  Texas stayed the course even when the Obama administration sought to intervene and send government funding to the abortion industry in Texas.  Texans decided they would rather refuse some federal funding than foot the bill for a global organization that centers on spreading and selling elective abortions.  In 2013 and 2015, defunding momentum continued with expansion of clean and life-affirming women’s health programs.  Money previously sent to the Breast and Cervical Cancer Screening Program and the HIV/STD program was sent to more worthy providers rather than Planned Parenthood.  Since 2013, Texas Right to Life has been urging legislators to adopt a Pro-Life Budget Umbrella Policy to put a stop to Planned Parenthood’s endless efforts to squeeze themselves into any and every possible government funded program.  In other words, end the game of Planned Parenthood Whack-A-Mole.

Many defunding efforts have been accomplished in the Texas state budget, and Texas Right to Life is urging the Senate Finance Committee and the House Appropriations Committee to adopt a permanent solution.  By passing a carefully crafted budget-wide policy, Texas can ensure that Planned Parenthood does not sneak into any more programs and benefit from the taxpayer dollars of Pro-Life Texans who do not support Planned Parenthood or the rest of the insatiable abortion industry.

Planned Parenthood’s lawyers will be hard at work for several more months trying to stop HHSC from officially cutting off their Medicaid funding.  At least in the first step of the lawsuit, they seem to have found a sympathetic ear in Judge Sam Sparks.  However, the Texas Legislature does not have to wait for the slow wheels of the judicial branch to weal a decisive blow to the abortion giant.  Contact your legislators today and ask them to end the game of whack-a-mole and adopt Texas Right to Life’s permanent budget-wide language to keep your taxpayer dollars from Planned Parenthood. 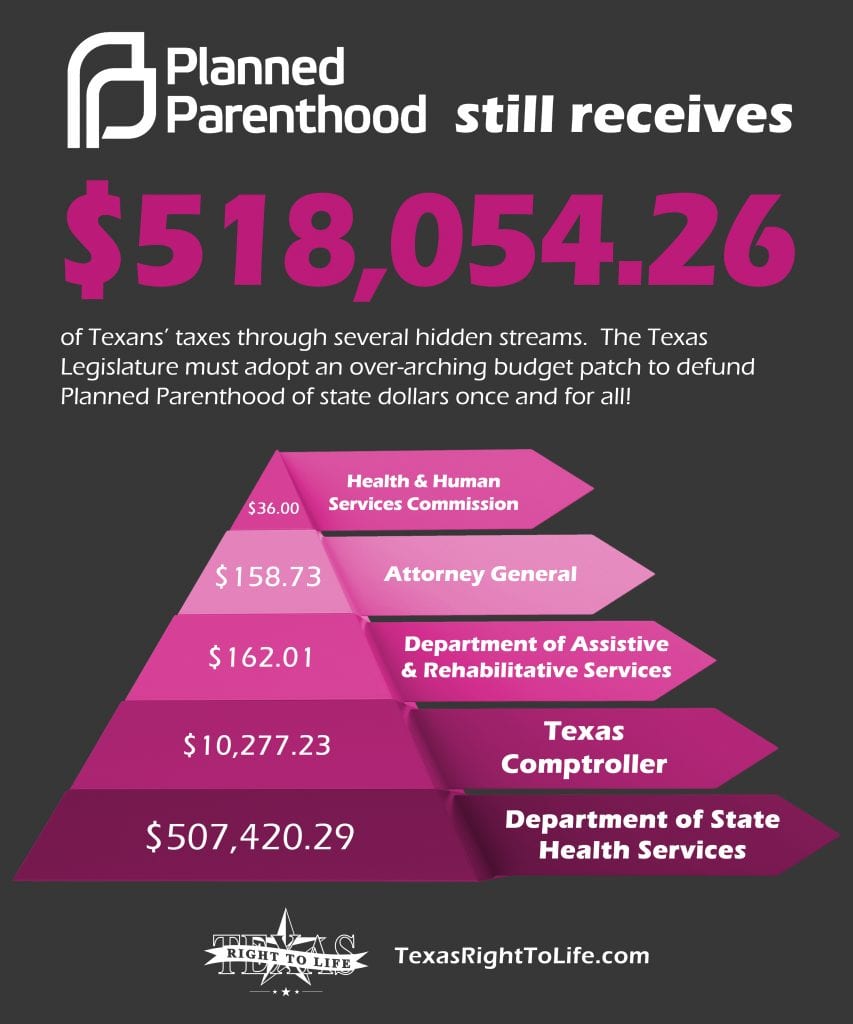