The Mustangs for Life at Southern Methodist University hosted 2016 Republican presidential candidate Carly Fiorina on campus in late March.  Co-hosted by SMU Young Americans for Freedom and College Republicans, the event reinforced the fact that to be Pro-Life is to be pro-woman by highlighting Fiorina’s presidential aspirations and entrepreneurial background alongside her role as a mother.  Fiorina’s presentation on campus was planned in conjunction with the Mustangs for Life’s annual Memorial of Innocents display, in which 2,500 crosses are planted on campus to represent the approximately 2,500 abortions committed every day in America.  This display typically provokes controversy and anger among the liberal student body and faculty who say the display shames women, and Mustangs for Life hoped Fiorina’s presence would help promote educational conversations. 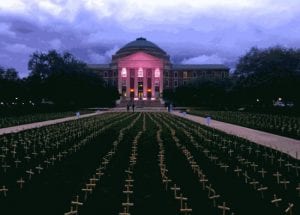 In the days leading to Fiorina’s speech on campus, Mustangs for Life members kept vigil at the Memorial, speaking with passersby about the display and the horrors of abortion during the day and protecting the display from vandals overnight (the display was completely torn down in the early hours of the morning last spring, prompting the protective vigil this year).  Daniel Rosa, Mustangs for Life Service Chair and Dr. Joseph Graham Fellow, received a phone call from a group member around 2 AM on the second night of the vigil reporting that a female student had kicked down several crosses, breaking one in the process.  Campus police presented the club with the option of pressing charges, but Mustangs for Life chose to forgo charges, instead asking the student to repair the cross.  “I hope she learned of the love that stems from our group,” Rosa said.  “If so, then we have done our part.”

Camille McCarty, President of Mustangs for Life and Dr. Joseph Graham Fellow, led her team in standing near the display during the day to offer listening ears to passersby and teach the Pro-Life message.  One student in particular told McCarty that she was moved by the display and was upset by the number of abortions daily in the US, but still supported abortion as an option.  After McCarty shared with her the science of embryology and fetal development, the student agreed that Life begins at fertilization and left the conversation struggling with her previous support of abortion.

Fiorina arrived on campus for her speech on the final day of the display, and tensions were high as more than 300 students and community members gathered to hear the business woman’s defense of Life.  Focusing on the “immeasurable worth” endowed in each human, Fiorina shared the story of her rise in the business world as her superiors pinpointed her potential, thus leading her to bigger and better opportunities.  She also recounted her husband Frank’s near brush with abortion when his mother was pressured to abort him.  Praising her mother-in-law for choosing Life, Fiorina said she has “thought so often how different my life would be if she had made a different choice.”  During the question and answer session following her speech, Fiorina was confronted with several angry questions from liberal students and faculty which she deftly handled, echoing McCarty’s discussion with the confused student earlier in the week by encouraging the anti-Life crowd to “look to the science.”  “Any scientist will tell you,” Fiorina said, “indisputably, Life begins at conception.”

Mustangs for Life will erect the display again next spring.  In the meantime, the group continues to stand for Life at SMU and convert hearts and minds to the side of Life.