You are at:Home»News»Issues»Abortion»Pro-Lifers Rally as HB 2 Trial Begins

As opening arguments commenced this morning in the United States Western District Court in the trial over Texas’ historic Pro-Life law, HB 2, hundreds of blue shirts flooded Republic Square in a peaceful, prayerful presence. HB2 passed in the summer of 2013 after a failed filibuster by pro-abortion elected officials.

Outside the courthouse, speakers led Pro-Life Texans in prayer and song as proceedings were underway in the adjacent building. Among the crowd were high school students, some of whom recently spent a week at Texas Right to Life’s Pro-Life summer camp in July. Moms with their babies and elderly were among the sea of blue-clad Pro-Lifers showing their support for HB2. 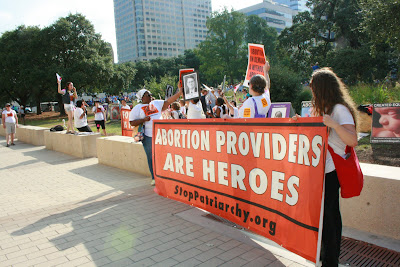 True to their word, the radical, leftist group, Stop Patriarchy, was on the scene to attempt to disrupt the Pro-Lifers. Their fifteen protesters shouted their mantra: “Without this basic right, women can’t be free; abortion on demand and without apology.” This was the same angry mob who wore orange and yelled under a different banner when the bill passed in 2013.

The lawsuit, Whole Woman’s Health v Lakey, takes issue with multiple facets of HB2’s provisions. The abortion industry’s focus is on the 30-mile rule of HB2 that requires abortion providers to obtain admitting privileges at hospitals within 30-miles of the abortion facility, and the plaintiffs are seeking to exempt two abortion facilities from this health and safety provision. Another part of HB2 that will take effect on September 1 requires that abortion mills meet ambulatory surgical center (ASC) structural and safety standards.

HB2’s requirements force abortion clinics and their physicians to meet the standards to which the rest of the medical community adheres. The abortion industry has not adjusted to the havoc that these measures have wreaked on their coffers.

Rather than updating their clinics to meet the mandated standards or accepting that women’s health trumps profits, the abortion lobby is trudging the legal path because they cannot and will not comply. Relinquishing responsibility for their actions, they seek instead to reverse the law.

Presiding over the case is Judge Lee Yeakel, who has ruled on several Pro-Life laws and even other HB2-related cases to date. The trial is expected to last three days. Texas Right to Life will be present, standing for and defending Texas women and pre-born children.