You are at:Home»News»Issues»Abortion»Pro-Lifers Commit to End Abortion in Houston

An estimated crowd of 1000 Pro-Lifers from Houston and the surrounding areas gathered Saturday, October 23rd at the Catholic Charismatic Center in Houston for the first ever Unite for Life – Houston rally.  The idea for this event was the brainchild of Dr. Mary Catherine Maxian, and coordinated by several area Pro-Life groups, including Texas Right to Life.

In an interview with Christian News Wire, Dr. Maxian, who is also the President of Health Care Professionals for Life, talked about the motivation behind the event.  “Unite for Life – Houston is designed to not only be motivational, but action-oriented.  Unite for Life – Houston allows people the opportunity to learn about the many different areas of the Pro-life movement so that they can pick a niche that fits them.  When we get all of the pro-lifers working together, praying together, voting together, and uniting our efforts with the will of God, the abortion industry will not stand a chance against us.”

Over 30 different Pro-Life organizations represented themselves, offering information and ways to become involved in the Pro-Life movement.  In between speakers, those in attendance had the opportunity to visit the booths and discover what Pro-Life groups are doing in the fight to end abortion.  The overall message of pray, commit, and vote also resonated throughout the day from the guest speakers.

The main attraction was Eduardo Verástegui, an international Pro-Life speaker and star of the Pro-Life film, “Bella.”  Mr. Verástegui shared his personal story and Pro-Life message with the crowd in both Spanish and English.   He currently lives in Los Angeles where he is involved with local pregnancy centers and strives to provide a positive Pro-Life impact on the Hispanic community.  His newest film in the works, “Cristiada,” is based on the life of Blessed Anacleto Gonzalez Flores, a Catholic who was martyred in Mexico.  Other speakers included Michael Mauldin, Karen Perez, and Elizabeth McClung, who all shared personal stories about the devastating impact of abortion on both women and men.  In addition, Mike Goss of Abstinence America and Raul Melchor, who represented Hispanics for Life, spoke briefly to the crowd about how the success of the Pro-Life movement to end abortion must include the support and commitment of African-Americans and Hispanics.  The resounding message of all of the speakers was that abortion can and must be stopped, but it will take the unified efforts of people of all races and religions who are willing to stand up and speak out against it.

Immediately following the speakers and booth visitations, attendees began a solemn, prayerful march to Planned Parenthood, escorted by mounted police on horseback.   Other uniformed officers patrolled the area by car and on bikes.  The procession of approximately 300 Pro-Lifers was met with a group of about 15 vocal protestors as they began the half mile march to Planned Parenthood.  Fortunately, there were no incidents of violence.  At Planned Parenthood, the crowd assembled around the front and side of the building while march leaders held walkie-talkies so that everyone could pray in unison.  Volunteers for Planned Parenthood documented the prayer vigil with cameras and video, but no conversation or altercations were reported.  One attendee observed a Planned Parenthood volunteer facing the crowd holding a bible.

Organizers of Unite for Life will meet to determine how next year’s event can draw even more awareness and involvement to end abortion in Houston. 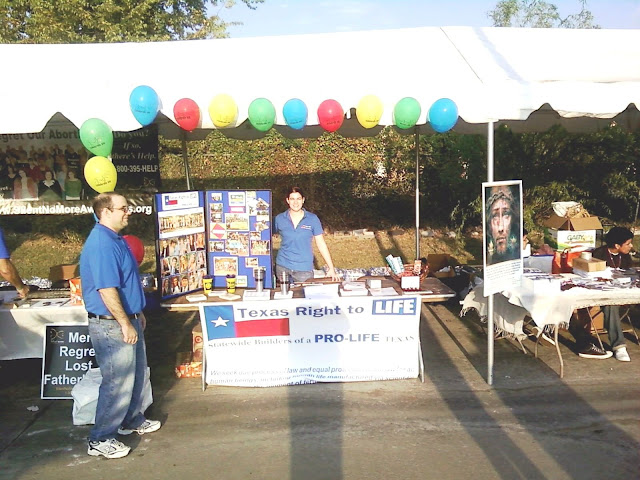