In May and June, Texas Right to Life welcomed two classes of Dr. Joseph Graham Fellows to Houston for an intense week of Pro-Life apologetics, bioethics, and leadership training.

Twenty-two second-year Fellows, representing 14 Texas universities, took part in their final year of training in mid-May.  The Fellows heard from various speakers on the topics of euthanasia, brain death, organ donation, the Pro-Life concerns with the Affordable Care Act, and post-abortion counseling.  Bobby Schindler, President of the Terri Schiavo Life and Hope Network and brother of the late Terri Schiavo, spoke to the students about his sister’s life, death, and the ways in which his organization advocates for and assists families in protecting their loved ones from imposed death.  Texas Right to Life Legislative Director John Seago joined training for an afternoon to discuss the history of Texas denial of treatment laws and what components make a strong Pro-Life law.  At the end of the week, Jacob and Katie Burow of the Abortion Dialogue Academy worked with the students, taught them new ways of dialoguing with opposition on campus, and had the Fellows practice their new skills by speaking to passersby at the University of Houston campus about their views on abortion. 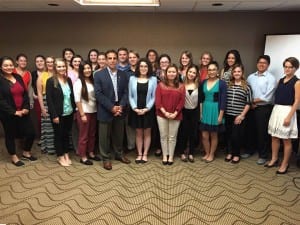 In addition to listening to inspiring and informative talks, the Fellows also learned from hands-on field trips taken throughout the week.  One highlight and an annual favorite among the Fellows, was a trip to Brookwood Community in Brookshire, Texas, a community for adults with disabilities.  The Fellows were inspired by the joy of the citizens at Brookwood and were renewed in their commitment to protect the lives and dignity of those with disabilities, before and after birth. 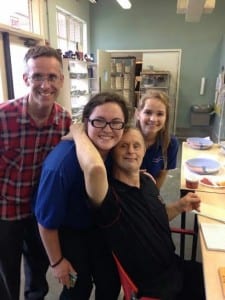 When training ended, students returned home ready to use their newfound knowledge on their college campuses in the upcoming fall semester.  Although the Fellows enjoyed their time at training and were looking forward to going home for the summer, many lamented that their final year of Fellowship training was complete.  Baylor University junior Anna Spallino even suggested the students petition for a third year of training!

In mid-June, 20 new Dr. Joseph Graham Fellows, “Newbies” as they are affectionately called, arrived for their first year of training.  These new Fellows represented 14 campuses across the state, including five universities where Fellows will establish a brand new Pro-Life group or revitalize an old group in the fall.  For many of the students, talks about the ethical questions surrounding in vitro fertilization, stem cell research, and cloning were their first exposure to these issues.  Several students particularly enjoyed a talk about Natural Procreative Technology (NaPro Technology) as a Life-affirming and holistic alternative to assisted reproductive technologies.  James Steward, a biblical counselor from West Texas, spoke to the students about healing after an abortion from the perspective of a post-abortive father.  His sincerity and compassion for children and women in crisis situations resonated with the Fellows and they enjoyed speaking with him further and seeking his advice after his talk had officially concluded. 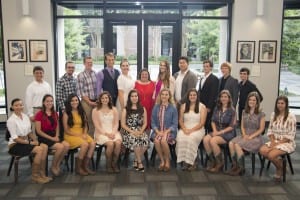 Before training ended, the Fellows spent time praying outside of the largest abortion facility in the Western Hemisphere, Planned Parenthood on Gulf Coast Freeway in

Houston.  For many, the experience was sobering and reaffirmed their commitment to approaching their peers on campus to educate them about the dangers of Planned Parenthood and abortion.  Aleyah Lyles, freshman at Lone Star College-Montgomery, was grieved to see so many African Americans entering the abortion mill.

“I want to educate my people on the dangers of abortion and the true facts of Planned Parenthood: African Americans are being targeted for abortions and most of these facilities are located in minority neighborhoods.  That’s why minorities make up a majority of abortions committed in the United States.” 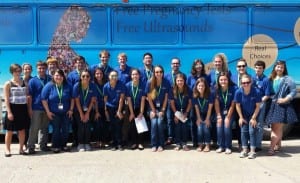 The Newbies pose in front of the mobile pregnancy resource center
outside of Planned Parenthood Gulf Coast.

Texas Right to Life is proud of and excited for these 42 student leaders, as well as our older Fellows who were not in attendance, as they go forth to create a Culture of Life at their universities and beyond.  We are grateful for all of our Dr. Joseph Graham Fellows in their commitment to defending innocent human Life.