You are at:Home»News»Issues»Abortion»Planned Parenthood may have been nervous last week, but things have only gotten worse for the abortion giant

Whoops.  Last week, in a conversation with George Stephanopoulos, Planned Parenthood President Cecile Richards implied that she believed her organization would be vindicated by forthcoming footage from the Center for Medical Progress.  “Look,” she said with a smirk, “we look forward to the facts coming out.”  Planned Parenthood was hitting rock bottom at that point – Richards’ sallow, nervous demeanor personified what the organization as a whole was experiencing.  Richards surely thought there was nowhere to go from there but up.  How could things possibly get any worse for Planned Parenthood than they already had?  Oh, but they did.

Richards’ remarks came just days before the most damning footage to date was released by the Center for Medical Progress: footage showing abortionists inside of a Colorado Planned Parenthood dissecting aborted preborn children on camera, and negotiating “per item” prices for their tiny, “completely perfect” organs while standing over their dissected bodies.  And this week, the release of the undercover video of Planned Parenthood Gulf Coast, the Houston abortion mill that is the largest in the nation, features the head of the “research” department.  Among other statements, she suggests that abortionists routinely alter abortions to harvest intact fetal organs, even intact fetal cadavers that are “all just a matter of line items.”

As Pro-Life commentator Matt Walsh has noted, the response from Planned Parenthood supporters has been one of utter, bizarre denial:  “Planned Parenthood apologists are staring at a brick wall and telling us there isn't a brick wall.  But of course they've been doing that for forty years.  The only difference is that now they're slamming their heads into the wall and still telling us the wall isn't there.  The level of intellectual dishonesty is almost superhuman at this point.”

But that denial is not working well for Planned Parenthood, which is drowning in the ill effects public awareness has on their image.  Case in point: Monday’s U.S. Senate vote.  Yes, the vote came up 6 yeas short of cloture.  But every American who even remotely follows current events knows something to the effect of, ‘Planned Parenthood is being scrutinized by the government for selling dead babies.’  That’s a priceless uptick in public awareness of Planned Parenthood’s most closely-held secrets regardless of the success or failure of a federal motion to defund the abortion giant.

The bottom line is that Planned Parenthood is shaking in their pink sneakers.  The 5-page statement submitted to the Texas State Senate Committee on Health and Human Services by PP’s mum attorney in lieu of testimony last week bespeaks the annihilation the group is facing.  The attorney refused to testify in person.  By now, Planned Parenthood had become cognizant of the fact that they were, indeed, imploding. 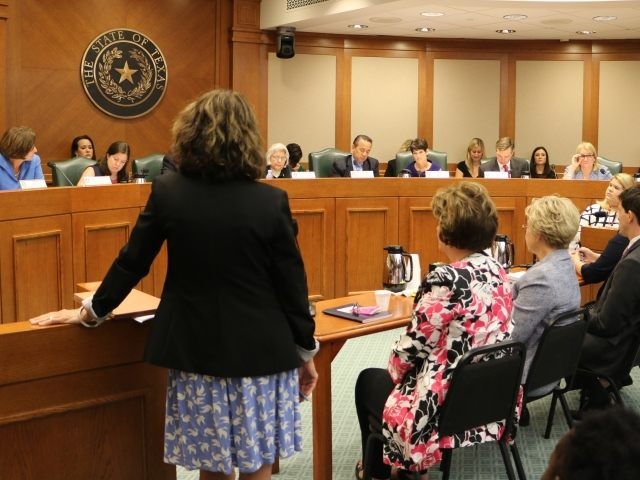 Planned Parenthood's attorney (in the black jacket) made an appearance at the hearing last week to submit written testimony but outright refused to answer questions.

Sandwiched between two nearly-identical sentences in a press release saying that, “For nearly 80 years” Planned Parenthood has been an altruistic provider of “health care,” we unearth the group’s real reason for not wanting to face unscripted scrutiny: fear.  “In April,” the PR reads, “individuals fraudulently representing themselves as research executives from a shell company called BioMax Procurement Services, LLC, visited Planned Parenthood's health center in Houston.  They provided fake identification to enter our health center under the guise of discussing research with clinical research staff.  We suspect that they were secretly taping those conversations and that those interactions in our facility will be included in another of their highly edited and deceptive videos.” [Emphasis added]

The video is out, and the investigation has begun in Houston.

Do you still “look forward to the facts coming out,” Cecile?