You are at:Home»News»Perry signs pro-life omnibus bill, HB 2, into law

The bill’s sponsors, Representative Jodie Laubenberg (R-Parker) and Senator Glenn Hegar (R-Katy) were present for the signing of the Pro-Life omnibus bill.

In signing House Bill 2 today, we celebrate and further cement the foundation on which the culture of life in Texas is built. This is a bill that protects unborn babies after the fifth month of a pregnancy. We know that not very far past that point, children can survive – and thrive – with appropriate care. New research and advanced technology give prematurely-born children a renewed chance at life, and I think that should give pause to us all as we argue the definition of viability and consider the human impact of abortion.

And at five months, many studies indicate these children feel the pain of their own deaths. It is our responsibility and duty to give voice to the unborn, the individuals whose very survival is at stake. This bill lives up to that responsibility.

It is also our responsibility to improve the quality of care women receive, ensuring that any procedure they undergo is performed in clean, sanitary and safe conditions, by capable personnel. We've witnessed far too many stories – from Philadelphia to Houston and elsewhere – about reckless doctors performing abortions in horrific conditions. We've heard stories about women getting sick – even dying – after treatment at such places.

At the end of the day, House Bill 2 makes sure that anyone performing abortions in the State of Texas is doing so in a facility that meets appropriate safety guidelines, and that people there are prepared to handle any emergencies that might occur.

Under this law, based on peer-reviewed scientific medical evidence, Texas establishes a compelling state interest in the lives of preborn children who feel pain.  These babies will be spared the excruciating pain felt during an abortion after five months of pregnancy.

Abortion centers will now have to abide by state and federal standards – including raising their standards to that of ambulatory surgical centers – placing women’s health above the political advocacy of the lucrative abortion industry.

“The majority of Texans support limits to abortion, and we are pleased that legislators responded to their constituents and enacted this important piece of legislation that protects unborn children in Texas.  Abortion clinics should not be held to a lower standard of care and regulation than other medical facilities, and those who break the law should be held accountable for jeopardizing the health and safety of women,” commented Elizabeth Graham of Texas Right to Life,  “We commend Governor Perry for leading for life once again.”

Below: View from stage as Governor Perry  signs historic legislation into law. 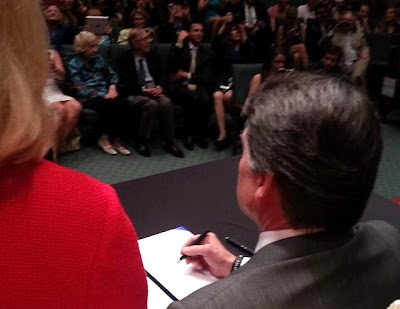