You are at:Home»News»Pelosi at border: all children "worthy of respect," ignores thousands of abortion deaths per day

Former Speaker of the US House, and current Minority Leader Nancy Pelosi, was in Texas over the weekend to visit the southern border between Texas and Mexico where Governor Perry has called the situation a crisis.

The Congresswoman from California had a few things to say about the children who have been stranded at the Texas border.

“This crisis that some call a crisis, we have to view as an opportunity,” Pelosi said. “If you believe as we do that every child, every person has a spark of divinity in them, and is therefore worthy of respect — what we saw in those rooms was [a]dazzling, sparkling, array of God's children, worthy of respect.”

At face value, the statement seems to indicate that the former Speaker is bent on protecting the vulnerable and least among us. Her words seem to point to the fact that even those who have been rendered speechless should be given a voice.

Yet Nancy Pelosi’s actions, votes, and her own words belie the statements issued at the border. Just last year, Pelosi told a group of reporters that she believed abortion, and late-term at that, to be “sacred ground,” when asked about the atrocities committed by Kermit Gosnell. She then proceeded to vote against a federal ban on abortions that would have eliminated abortion after five months on the basis that these unborn children feel pain.

The hypocrisy strewn throughout Pelosi’s words is almost palpable. While she urged the public to use the border crisis as an “opportunity to show who we are as Americans, that we do respect people for their dignity and worth,” she continues to champion for more than a million abortion deaths every year.

If the Congresswoman wanted to truly show the world that we are a nation that respects the innate worth and dignity of every human life – not just those who have safely crossed the finish line of pregnancy– she would denounce the abortion industry’s predatory tactics on women and brutality against the unborn.

Pelosi’s words are empty. Her actions are condemning of those who do not meet her standard of “worthy.” Unfortunately, the barbarism of thousands of babies killed every day is not sufficiently politically convenient for Pelosi to muster enough energy to care.

You can view Pelosi's remarks here. 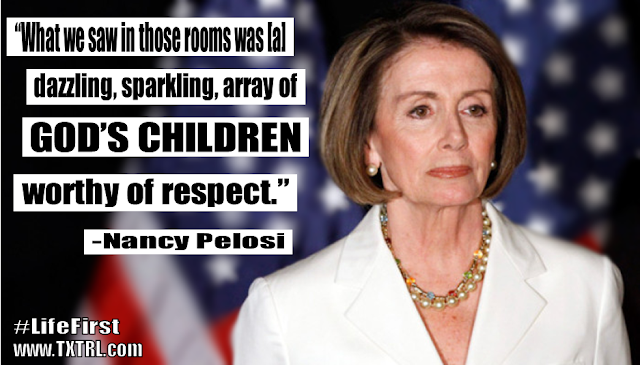