You are at:Home»News»Issues»Abortion»Obama administration jeopardizes women´s health due to Pro-Life rules

On Monday, December 12th, the Obama Administration refused to renew funding for Texas' Women's Health Program (WHP) because of new state rules that disqualify abortion business affiliates from participation in the program.  The WHP encompasses Medicaid family planning services for low income women.  The program started through authorizing legislation in 2005 and was renewed in the recent 82nd Legislative Session with new Pro-Life rules.

In February of this year, Attorney General Greg Abbott released two opinions that clarified that the state could adopt rules and regulations for participation in federal programs, and that doing so does not conflict with federal law.  Immediately following the Centers for Medicare & Medicaid Services (CMS) announcement, Texas Health and Human Services (HHS) officials rebuked the CMS, stating that the Center is misrepresenting federal law in order to fight off Pro-Life laws and state policies.

Governor Rick Perry recognized that the Administration is jeopardizing women’s health.  He said, “I am concerned the Obama Administration is playing politics by holding women's health care hostage because of Texas' Pro-Life policies, sacrificing the health of millions of Texas women in the name of their pro-abortion agenda.” 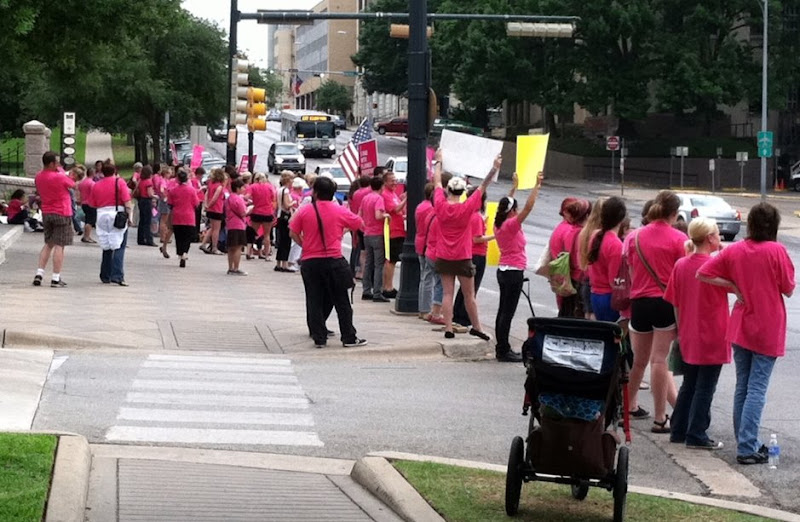 Strong Pro-Life rules were proposed in the legislation to reauthorize the WHP during the 82nd Legislative Session.  Consequently, Planned Parenthood staged a poorly-attended rally featuring Richards, who announced that she would rather the entire WHP be canceled than for Planned Parenthood to be disqualified from participating. (Read that story here).

The Women's Health Program was established in 2005 as a pilot project to reimburse health care providers for family planning and preventative care services administered to women who fell below the poverty level.  In reauthorizing the WHP, the legislature incorporated rules to stop the program from funding the abortion industry.

Texas Right to Life had ample cause to lobby for the new rules, since Planned Parenthood—the number one abortion committer in Texas—circulated a letter in the Capitol, confirming that they provide over 40% of the services in the entire WHP.  Legislators responded to this news by cleaning up the WHP so that abortion providers are not eligible for participation.


CMS has extended the program until March, and if no further progress is made, the Women's Health Program will expire in Spring of 2012.