You are at:Home»News»New Zealand mom fights abortion law that had devastating effect on her 15-year-old daughter

Earlier this year, we brought you the heartbreaking story of Hillary Kieft’s daughter, who underwent a secret abortion at the age of fifteen in New Zealand.  Under a “privacy” law in New Zealand, minors are permitted to undergo abortions without parental consent or knowledge.  Worse, these abortions are organized and hidden by their schools.  When Kieft called her daughter Ariana’s school to ask where her daughter was on the day of her abortion, Kieft was lied to and told that Ariana was at a “counseling appointment.”

Kieft is campaigning for change on behalf of other minor girls in New Zealand.  As a mother, she does not want to see any other young girl suffer the same horror that has ravaged her own daughter’s life for years since the abortion.  Last month, Kieft shared her testimony with a government committee that can now choose whether or not to take action regarding the “privacy” law that allows girls to undergo secret abortions without any support from their families. 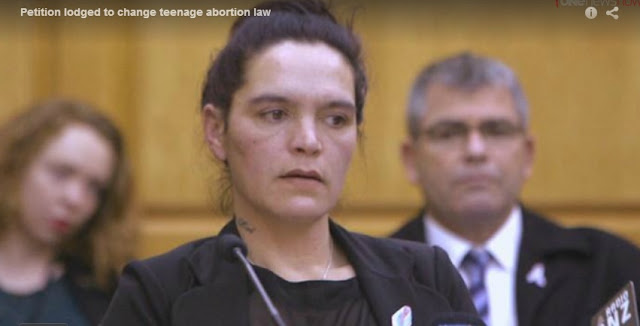 Kieft says that Ariana feared disappointing her parents with the news of her pregnancy.  She underwent an abortion secretly and was expected to harbor her secret, and the mental and physical repercussions of the abortion, completely alone.  Kieft shared that she knows how young girls like her daughter feel when they experience an unplanned pregnancy at a young age:

When I was 16 I had an abortion.  I know how it feels.  A lot of girls don’t tell their parents due to shame.  I never told my mum – I was ashamed.  And it was the last thing I wanted to do, was hurt my mom.

Not until Ariana attempted suicide after the abortion did her parents discover the truth about what had occurred.  She is also infertile because of the procedure.

Our daughter had to make a life decision with a stranger and was expected to keep this as a secret from us.  At age fifteen, she is still a child.  And the saddest thing is, if we had known, we would have been there.  We would have been able to give her the help she needed.

Kieft knows that the committee can choose not to do anything, but she has no intention of abandoning her crusade to help young girls if that happens.  She is determined to continue until she effects change.  “I believe there will be a change, and if they prove me wrong, well, I’ll just keep going,” she said.

Our reform, House Bill 3994, protects the integrity of the judicial bypass process by prohibiting lawyers working for Big Abortion from abusing the legal system in an effort to advance their profit-driven agenda.  Lawyers may no longer cherry pick their judges or re-file denied petitions in neighboring courts.  Judges and abortionists are also held to stricter standards of reporting suspected abuse in a minor thanks to HB 3994.