Below are updates from several campus Pro-Life groups that were either established or revitalized during the last year.  Thank you for your continued support for these students.  Join us in celebrating the fruits of their labors as they strengthen their Pro-Life efforts on campus!

Hippocratic Medical Society at Texas Tech University Health Sciences Center
After initially being denied status as a student organization, then being told they were “too political” and must include abortion alternatives AND abortion in their mission, the Pro-Life medical students at Texas Tech University Health Sciences Center nearly sought legal counsel to establish their Right to Life group on campus.  The students decided to appeal peacefully once more.  Finally, the medical school softened.  They told the students to select a more specific name and update their mission statement to distinguish themselves from an already existing medical ethics group.  After this easy change, The Hippocratic Medical Society, a now registered student organization on campus, seeks “to affirm and promote Hippocratic ideals.  Therefore, we seek to promote and protect human Life from conception to natural death, apprise our community of the inherent dignity of all persons, and advocate for those who are disenfranchised, neglected, or abused.”  Texas Right to Life Graduate Scholar Frances Dijeh and her co-leaders look forward to hosting Pro-Life events and speakers for their peers at the health sciences center.

Rattlers for Life at St. Mary’s University
Rattlers for Life President and Dr. Joseph Graham Fellow Matthew Keller established the Pro-Life group at St. Mary’s University in spring 2016.  “We are utterly unrecognizable from last semester,” says Keller about their current success.  “This is only October of the new academic year and we have already had ten meetings, worked two tabling days, hosted a bake sale fundraiser, volunteered at the Allied Women’s Center (a local pregnancy center), prayed outside of Planned Parenthood multiple times, and seen 12 new, passionate members join our group.”  The organization has also added a secretary position and is planning projects that include a Pro-Life chalk day and a diaper drive for local pregnancy centers.

ACU for Life at Abilene Christian University
After gaining recognition as a club in fall 2015, ACU for Life experienced a surge in membership at the beginning of fall 2016.  At the activities fair in August, 150 students expressed interest in joining the club and 19 of them were interested in leadership positions.  ACU for Life hosted a campus-wide movie night in November with 160 attendees, showing the Pro-Life documentary 180.  “Our members are excited to bring in a new crowd to help spread the Pro-Life message and ignite passion among the student body to bring an end to abortion,” said Gabriela Ramos-Mata, co-president of ACU for Life and Dr. Joseph Graham Fellow.  In the fall semester, the group submitted a letter to the editor of the school newspaper, The Optimist, about the importance of voting Pro-Life. 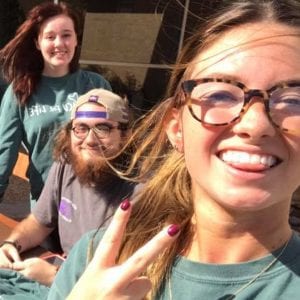 TCU Students for Life at Texas Christian University
Although this is the first semester TCU Students for Life is a university-recognized group, 60 students registered on the email list at the activities fair and roughly 25 students regularly attend meetings.  Led by President and Dr. Joseph Graham Fellow Dani Orban, the group volunteers time with the Fort Worth Pregnancy center.  In early October, TCU Students for Life held their first major on-campus event, a Cemetery of the Innocents display, to give a visual representation to the student body of how many abortions are committed in America daily.  TCU Students for Life hosted another campus outreach event to include adoption advocacy to commemorate November as National Adoption Month. 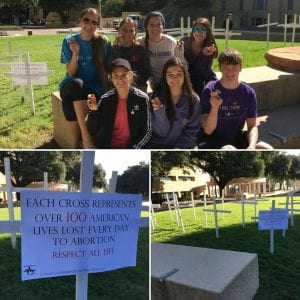 Pro-Life Huskies at Houston Baptist University
Following a slow spring 2016 semester, the Pro-Life Huskies at Houston Baptist University has grown tremendously.  Under new leadership, Pro-Life Huskies’ slogan is to “Engage, Educate, and Equip” the HBU student body on Pro-Life issues, focusing primarily on abortion.  The Pro-Life Huskies brings their vision to life with several informational tabling displays on campus.  According to president and Dr. Joseph Graham Fellow Micah Jimison, the group will “focus on fundraising to be able to create opportunities for our members to get involved by visiting the Capitol during the legislative session, and by hosting events, like a Cemetery of the Innocents display.” 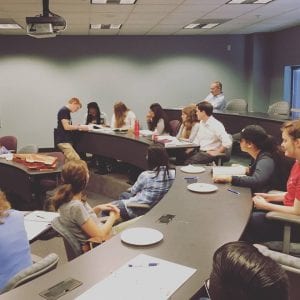