You are at:Home»News»Issues»Abortion»Mike Pence gives Pro-Lifers and the preborn an unfiltered voice

The debate took place in Farmville, Virginia, and was moderated by CBS News anchor Elaine Quijano.  Questions about “social issues” (i.e., faith and abortion) were not asked until near the end of the debate, but quickly dominated voters’ interests.

After Tim Kaine delivered a unconvincing treatise on how he believes he can be a Catholic abortion supporter (a fallacy of epic proportions), Mike Pence diverged from Kaine’s detracting verbosity and cut straight to the heart of the Clinton-Kaine position on abortion:  “[W]hat I can’t understand is Hillary Clinton,” Pence said, “how she can support a process like partial-birth abortion.”

The partial-birth abortion method involves delivering a live, preborn child in the breech (feet-first) position until only the baby’s head remains in the woman’s birth canal.  At that point, the abortionist inserts a sharp object, such as scissors, deep into the back of the baby’s head and collapses his or her skull.  Finally, the head of the baby’s now-lifeless body is removed from the birth canal. 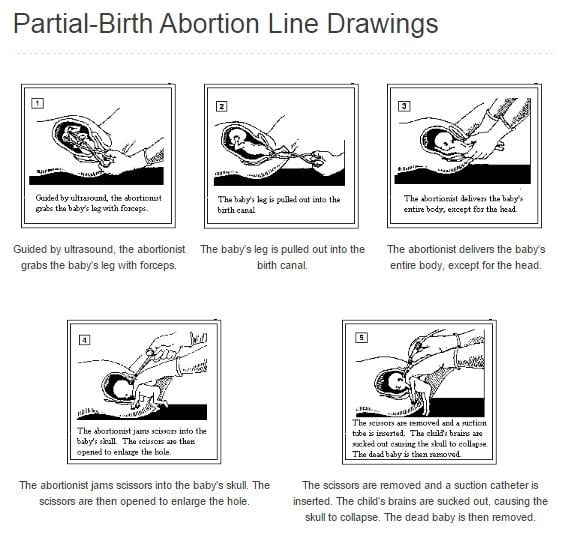 Pence amplified his point, saying: “At the very idea that a child almost born into the world could still have their life taken away from them, I cannot in conscience [understand]a party that supports that.”  And Pence’s analysis of Hillary’s position on this barbaric practice was accurate (indeed, Kaine did not attempt to object or “clarify” the stance).  Hillary not only remained mum as her husband vetoed a bill to ban the practice of partial-birth abortion (a measure that was not passed until the George W. Bush administration), but she maintains in her current campaign that no substantive abortion restrictions should ever be legislated.

Pence continued his offensive against the anti-Life posture of the Democratic ticket: “Hillary Clinton wants to repeal the long-standing provision when we said we would not use taxpayer dollars to fund abortion.”  Pence was talking about the Hyde Amendment, an appropriations rider that Congress has voted to include in the annual budget for forty years.  The official platform of the Democratic Party – Hillary’s party – calls for the repeal of this amendment, which has saved more than two million preborn children from death by taxpayer-funded abortion according to a new analysis.  As president, Clinton would push for forced taxpayer coverage of abortion – even though most Americans oppose such a mandate.

Pence underscored the absurdity of Kaine’s dualism on Christianity and abortion.  “For me,” Pence said, “my faith informs my life.  For me, it all begins with cherishing the dignity, the worth, the value of all human life.”  A little later, Pence hit the debate out of the park with the following: “A society can be judged by how it deals with its most vulnerable – the aged, the infirm, the disabled, and the unborn.”

After Pence’s Pro-Life defense, Google Trends revealed that abortion was the top area of interest for debate viewers Tuesday night.  This data paints a stark contrast to the narrative that Americans don’t care about the Right to Life.  The topic not only dominated Tuesday night searches, but has trended as the #1 or #2 ranked issue in Google searches every day since the first Trump-Clinton presidential debate on September 26 and has been within the top five most searched political issues every day for a month.

Indeed, debate moderators have been loath to include questions about crucial Life issues this election cycle.  But American voters, meanwhile, continue to confirm that abortion is an issue that concerns them and influences the direction in which they cast their vote.  Moving forward, debate moderators should not only ask about abortion, but prioritize the issue as a key fixture in the remaining presidential debates, which will take place on Sunday, October 9 and Wednesday, October 19.