You are at:Home»Legislation»[Live] Pro-Life Election Results from Across the State
Reading Time: 8 minutes
Texas Right to Life staff will be live-blogging election results starting at 7 pm. Please check back to see the Pro-Life victories from around the state.
Staff bloggers:
John Seago, Legislative Director
Sarah Crawford, PAC Coordinator
Emily Horne, Legislative Associate
Veronica Arnold, Legislative Associate
———————————————–
12:35 p.m. By John:
Definitely a tough election night, but it’s undeniable Pro-Life movement in Texas is victorious. Texans will always vote their values, and Texans are unequivocally Pro-Life. We will have at least 92 votes in the Texas State House and more than 2/3rds of the votes in the Texas State Senate. With a federal administration set on keeping Planned Parenthood funded with taxpayer dollars, more than 75,000 abortions in Texas annually, and women being abused by the abortion business there is much work to be done. Thank you for all your work and support Pro-Lifers…. by the way: 62 days until the Texas Legislative Session begins.
12:20 a.m. By John
Texas Right to Life congratulates Rep. Larry Taylor (pictured), Rep. Ken Paxton, Rep. Schwertner, and Rep. Hancock in their victories in seeking seats in the Texas Senate. We look forward to working with you guys in your new offices! 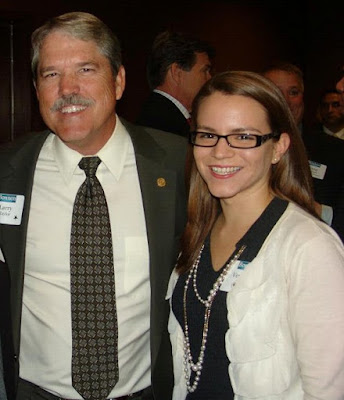 11:55 p.m. By Emily:
In tonight’s closest Congressional race in Texas, Pro-Lifers suffered a loss in CD-23. With 86% of precincts reporting, its 49.8% to 46% in favor of Rep. Pete Gallego, who is defeating the Texas Right to Life endorsed Pro-Life incumbent Congressman “Quico” Canseco. The Congressman has been a huge ally for the cause of LIFE, and Texas Right to Life is sorry that he was ultimately unsuccessful in his reelection bid. Nevertheless, we are still pleased that 25 out of the 36 members in the Texas Congressional delegation are Pro-Life.
11:49 p.m. By Veronica
Texas Right to Life Legislative Associate Veronica Arnold with newly Representative-Elect Dr. Greg Bonnen. Another great addition to our Pro-Lifers in the Texas State House. 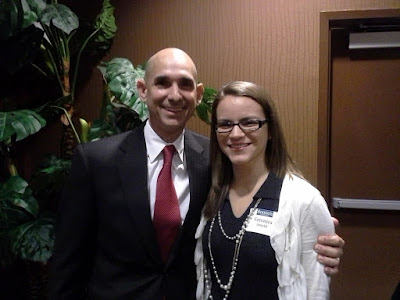 11:35 p.m. By Sarah:
After a extremely close race, Texas Right to Life is excited to continue working with Rep. JM Lozano! With 73% of precincts reporting and the percentages being 53% to 46%, we call this race for Rep. Lozano. As a member who voted to remove millions from the abortion industry in Texas and voted to pass the strongest Sonogram Law in the nation, Lozano is truly an ally for Life.
11:30 p.m. By Texas Right to Life Director, Elizabeth Graham
“This is a devastating presidential election for life.

In his first four years, President Obama has earned the worst anti-life record than any other US President in American history. President Obama has relentlessly campaigned and championed for Planned Parenthood, the nation’s largest abortion business, and healthcare managed by rationing and death panels.

To protect life, our Pro-Life majorities in the Texas Senate and House must pass laws against the tax-payer funding of abortions and the anti-life health care rationing that is planned in Obamacare.

Pro-Lifers must make our voices louder in Texas and in DC to keep out Supreme Court justices who would reaffirm the deadly decision of Roe v. Wade.”

11:25 p.m. By Emily:
Solid victory for State Board of Education candidate endorsed by Texas Right to Life: Tom Maynard. We are happy to report a win in SBOE District 10! These Pro-Lifers understand the importance of the LIFE issue, and are determined to keep hostile, anti-life materials out of our Texas schools.
11:08 p.m. By Veronica:
BREAKING: Live from the Randy Weber party in League City: With 51% of precincts reporting, and former Congressman Nick Lampson conceding, Texas Right to Life-endorsed Rep. Randy Weber, wins his bid for the US House of Representatives! Rep. Weber has been a huge ally for the cause of LIFE in the Texas House, and now we are pleased to have the chance to continue working with him on Capitol Hill. This brings us up to 25 Pro-Life votes from Texas, which is the most Pro-Life votes from any one state’s Congressional delegation.
10:29 p.m. By Sarah:
Congrats to Rep. Jason Isaac! With 64% of precincts reporting, HD 45 goes to the Pro-Life champ! Rep. Isaac voted to remove millions from the abortion industry in Texas and he voted to pass the strongest Sonogram Law in the nation. Jason Isaac is an ally of LIFE, and Texas Right to Life is ready to continue working with him in Austin.
10:09 p.m. By John:
In numerous competitive Texas House races, Pro-Life advocates are leading. Hang in there: Kyle Kacal (HD-12), JM Lozano (HD-34), Rep. Jason Isaac (HD-45), Rep. Rep. Linda Harper-Brown (HD-105), Rep. Kenneth Sheets (HD-107), David Pineda (HD-144). Can we get more than 95 Pro-Lifers in the House?
10:00 p.m. By Sarah:
It’s a close one between Pro-Life Congressman Quico Canseco and pro-abortion State Rep Pete Gallego. Canseco is coming in just slightly over Gallego with 45% of the district reporting. We’ll keep you posted on the this critical race.
9:42 p.m. By Sarah:
TRTL Executive Director Jim Graham with Texas Supreme Court Justice Phil Johnson and his wife Carla at the Texas Right to Life Victory Party in Austin.
9:30 p.m. By John:
Confirmed: 85 total Pro-Life votes in House so far — including-TRTL endorsed, Pro-Life incumbents, and other Pro-Life candidates.
9:25 p.m. By John:
Now, 56 confirmed Texas Right to Life endorsed candidates successful in Texas House bids.
9:11 p.m. By John:
With Dr. Donna Campbell’s win, we now have 21 reliable Pro-Life votes in the Texas Senate! This is vital to passing strong Pro-Life legislation since the state Senate requires 2/3rds of the 31-member body to approve bringing a bill to the floor before any debate and a final vote. Getting 21 Pro-Life votes before debate even begins has historically been one of the hardest steps in passing meaningful life-saving laws.
9:07 p.m. By Sarah:
Congrats to endorsed Ed Thompson (HD-29), Ron Simmons (HD-65), Craig Goldman (HD-97) on their successful bids, and Rep. Dan Huberty (HD-127) and Rep. Debbie Riddle (HD-150) on their re-elections. Reps Geannie Morrison (HD-30), Byron Cook (HD-8), Tim Kleinschmidt (HD-17). This brings the current number of Texas Right to Life-endorsed House victories to 52 so far!
8:55 p.m. By Emily:
In July, Texas Right to Life celebrated unseating the last Pro-Choice Republican left in the Texas Senate. We early endorsed Dr. Donna Campbell for SD-25 since she so strongly embodied what a Pro-Life candidate should be – well versed and strong on all the LIFE issues. After many ups and downs in that race, including beating Sen. Jeff Wentworth, we could not be more thrilled to finally report a victory in SD 25 with a huge lead! 7% precincts reporting, and the votes being 180,967 to 88,492 in favor of Campbell. We can not wait to work with Dr. Campbell in Austin come January 8th!
8:45 p.m. By Veronica:
Texas Right to Life is calling an unyielding win for Life with Supreme Court Justices Don Willett, John Devine, and Nathan Hecht, as well as Railroad Commissioner Barry Smitherman. Congratulations to these staunch advocates for Life! We appreciate your dedication to Life and we look forward to working with all of you.
8:21 p.m. By Sarah:
At least 18 of Texas Right to Life endorsed delegates to the US House of Representatives have successfully won their reelection bids. Delegates Louie Gohmert, Ted Poe, Sam Johnson, Ralph Hall, Jeb Hensarling, John Culberson, Kevin Brady, Michael McCaul, Mike Conaway, Bill Flores, Randy Neugebauer, Lamar Smith, Pete Olson, Kenny Marchant, Michael Burgess, Blake Farenthold, John Carter, and Pete Sessions will all be returning.
Texas Right to Life congratulates these men as they take their strong Pro-Life convictions back to Washington, D.C. as the strongest Pro-Life delegation to Congress in the country. These men have stood strong, voted, and sponsored legislation that supports and protects innocent human lives. Our delegates will continue to stand as a testament to the rest of the country that Texas is Pro-Life and that our votes will always reflect that.
8:13 p.m. By Sarah:
It’s official, former Pro-Life Congressman Steve Stockman will be returning to DC! With 2% of precincts reporting, but leading by a large margin, we’ve called this race. Congressman Stockman sponsored legislation that banned partial-birth abortions and even sponsored legislation that would have declared life beginning at conception. We are thrilled to welcome him back to Congress and part of the country’s most Pro-Life delegation from Texas!
7:56 p.m. By Veronica:
Live with Rep. Randy Weber who is running for Congressional District 14. 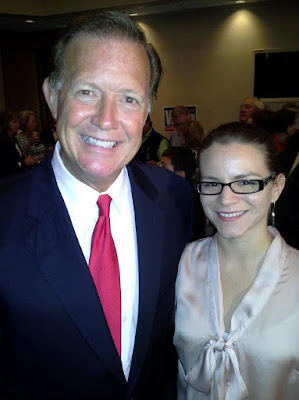 7:38 p.m. By Emily:
Solid victory for State Board of Education candidate endorsed by Texas Right to Life: David Bradley. We are happy to report a win in SBOE District 7! David understands the importance of the LIFE issue, and is determined to keep hostile, anti-life materials out of our Texas schools.
7:33 p.m. By John:
Tonight we’ve got two close races in Congress and two races in the Texas State Senate to watch: CD-23, CD-14, SD-10, and SD-20. These are way too close to call now, but stay tuned since these will have a direct impact on the Pro-Life movement in DC and Austin.
7:25 p.m. By John:
Congratulations Ted Cruz from Texas Right to Life! In a large victory tonight Mr. Cruz has defeated his democratic opponent who is a proven pro-abortion advocate, Paul Sadler. We are extremely pleased that Texas will now have two Pro-Life voices in the US Senate. The US Senate is our last resort to keep Anti-Life judges out of the Supreme Court.
7:15 p.m. By Emily:
19 more Texas Right to Life endorsed candidates’ races have been called! This now brings our total Pro-Life votes in the house to 47 out of 150 in the Texas House! Congratulations to Steve Toth, Scott Turner, Rep. Larry Gonzales, Rep. Doc Anderson, Rep. Phil King, Rep. Tan Parker, Rep. Doug Miller, Rep. John Frullo, Jonathan Stickland, Rep. Bill Zedler, Giovanni Capriglione, Pat Fallon, Rep. Cindy Burkett, Rep. Lyle Larson, Rep. Allen Fletcher, Rep. Bill Callegari, Rep. Jim Murphy, and Rep. Dwayne Bohac! Our legislative team will be ready to hit the ground running in January, and these 19 extra votes will help us get more Pro-Life victories!
6:51 p.m. By Emily:
To start this coverage out, Texas Right to Life is happy to already have a few Pro-Life votes tallied! Either the vote counters were just lightning fast or these guys didn’t have opposition. And we’re ok with that! The races below are guaranteed victories, and we start the night out with 28 Pro-Life votes out of 150 House Members.
.