A new crop of high school students was exposed to the truth of Planned Parenthood and to the true meaning of the Pro-Life cause at Texas Right to Life’s Team LIFE Camp in early April.  Held at Camp Chrysalis in Kerrville, TX, Team LIFE hosted 21 high school students ages 13-18 who hailed from cities as far away as Grandview.  Pro-Life talks taught campers the importance of speaking Pro-Life truths in love, offering resources and compassion to mothers and fathers in unexpected pregnancies, and eliminating problems rather than people.  The remarkable weekend was filled with canoeing, hiking, campfires, lip sync battles, and new friends.

Throughout the weekend, campers interacted with their small group leaders, current Pro-Life college leaders and recent college graduates, who encouraged the campers to discuss the new and difficult content.  Several counselors presented talks during the weekend, including Texas A&M senior genetics major and President of Pro-Life Aggies Allyson Hunter, who taught the campers about beginning of Life science and fetal development; several students considered this their favorite talk of the weekend.  Counselors also used their talents to serve in other ways.  Daniela Barrett led the camp in praise and worship on her guitar during a breezy and blue-skied Saturday afternoon.  Campers and counselors formed a bond that will continue beyond camp as counselors mentor campers in their work to establish Pro-Life groups at their high schools.

When campers became comfortable, they shared personal Pro-Life stories or preconceived notions about abortion and the Pro-Life movement.  Several students struggled with opposing abortion in the cases of rape or incest, but afterward left camp with a clear understanding of why Pro-Life advocates defend Life regardless of circumstances surrounding conception.  During a particularly emotional moment, a camper shared the story of how her adoptive parents were approached by her biological mother, who had experimented with drugs and alcohol during pregnancy, and asked if they would adopt her baby.  Another camper recounted the story of his grandfather who experienced a serious head injury while fighting in the Vietnam War.  Although his grandfather was expected to die, he recovered and lived a full life.  Through the life of his grandfather, the camper realized the importance of one life in the continuance of a family tree.

When parents arrived to retrieve their children, seven campers expressed interest in establishing Pro-Life clubs at their high schools.  Others insisted they would attend Team LIFE next year and would bring friends to experience the weekend as well.  Several indicated their desire for a longer camp or one focused on more advanced Pro-Life topics like euthanasia and stem cell research, while one student wants to incorporate her newfound commitment to the Pro-Life cause with her anti-bullying advocacy.  Texas Right to Life is excited about the impact these students will make on their peers, schools, and communities in building a Culture of Life. 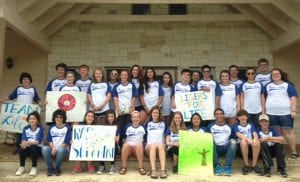 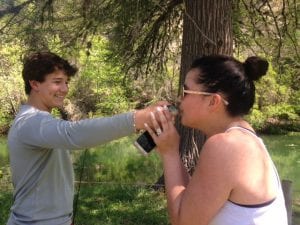 Ellie (right) makes good on a dare to kiss a fish that was caught by another camper. 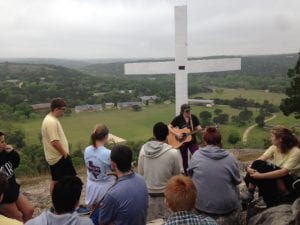 Campers hiked to the bluff towering over Camp Chrysalis for praise and worship.