You are at:Home»News»Issues»Bioethics»Guest Column: Texas Republicans Stand For Life!
June 25, 2013 was a significant day for Republicans, Democrats, and me.  For Democrats, it was an opportunity to gain national attention by filibustering and, at least temporarily, killing legislation that would prevent late term abortions, increase medical standards for abortion clinics, and require those distributing the abortion pill (RU486) to follow FDA guidelines.  Democrats celebrated their short-lived victory, parading their 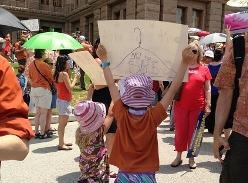 coat hangers, orange shirts, and newfound hero to a national audience.  For Republicans, it was a clarion call that awakened a conservative base that had become comfortable with its majority status and pro-life views.  For me, it was time to celebrate new life as my wife and I welcomed our son into the world.  Thankfully, Republicans persevered, calling another special session and adopting legislation consistent with our party's strong pro-life platform.  Unfortunately, the one Republican who voted against the bill, Houston area State Representative Sarah Davis, chose to attack our party platform, and the grass roots activists who created it in a recent op-ed, Davis: Government Has No Place In Abortion Debate.

In her op-ed, State Rep. Davis attacks the Republican Party's pro-life stance, stating “as a political party, Republicans should not try to dictate to millions of women a decision that is so personal in nature.” Ms. Davis is making the same argument articulated by Democrats and Planned Parenthood for decades.  Ms. Davis' pro-abortion partners are the same orange-shirted, coat hanger waving, pro-abortion forces that have unsuccessfully challenged Texas Republicans at the statewide level since 1994.  Ms. Davis fails to realize that the Republican Party platform, and its pro-life plank, were created by grassroots Republican activists who have worked successfully to elect “pro-life” Republicans to every statewide office.  It should also be noted that all of her Republican colleagues in the House and Senate supported the pro-life bill she criticizes in her op-ed and voted against.  Why do they do it? 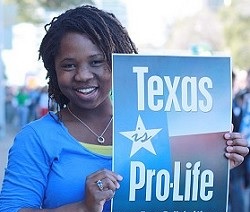 Because they, like I, believe every life is sacred from conception to death.  This is a Republican ideal that dates back to the founding of our Republican party and its first president, Abraham Lincoln.  Like the majority of modern day Texas Republicans, President Lincoln believed that every life was sacred and worthy of protection under the law.  The same values have followed our Republican Party from 1860 until today.  Our pro-life platform proudly embraces the first few lines of the Declaration of Independence in that everyone is endowed by our Creator with an unalienable Right to Life.
Like Planned Parenthood and most Democrats, Ms. Davis claims she isn't for abortion but, instead, is pro-freedom.  Specifically, she argues that “the Republican Party stands for personal freedom, which is lost when government controls our lives.”  Conspicuously absent from Ms. Davis' view of freedom is the unborn child's freedom to live.  Through our platform and our elected officials, Republicans reject the idea that someone should be free to take innocent life.  Unfortunately, Ms. Davis has voted against every pro-life bill put before her.
Ms. Davis fails to realize that our majority status was won by Republican-elected officials who stand for life. The quickest way for us to surrender our majority status in Texas is to adopt Ms. Davis' anti-life position. As the Republican Party Chairman in Harris County, I am proud to represent tens of thousands of Republicans who will continue to stand for life.
Jared Woodfill is the chairman of the Harris County GOP.