You are at:Home»News»Guess which State Rep. stands behind Wendy?

Susan King claims that she is Pro-Life, yet last year she spoke AGAINST key provisions of Texas’ most powerful Pro-Life Bill (HB2) on the House floor and voted for numerous weakening amendments.

King even told an Abilene newspaper (video below) that she’s “not sure that some parts of [HB2] were the best decision.”

Susan King does not stand for Life, nor does she stand for your values; she’d rather stand behind Wendy Davis.

Check out this photo of her the night of Wendy Davis’ filibuster, wearing an orange jacket (orange was the color abortion supporters wore when they stormed and disrupted the Texas legislative process).

This photo says it all! 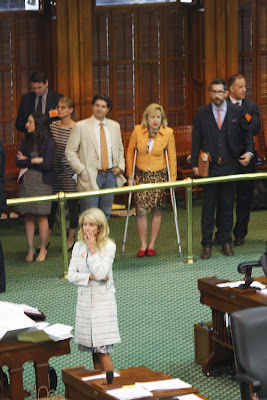 King supported these loopholes to House Bill 2, the newest and strongest Pro-Life law in the nation:

Susan King FAILED with an abysmal 29% on the Texas Pro-Life Legislative scorecard.

Susan King’s votes, actions, and even her own words prove her priorities do not lie with the people of District 71, but rather her own interests.

Despite 78,000 abortions in Texas annually, Susan opposed your wishes for stronger protections on preborn babies, and voted against tighter restrictions and higher safety standards at abortion centers.

To vote Pro-Life, visit TexasRightToLife.com for a full list of Pro-Life candidates in the March 4 Primary Election.

Watch Susan King speak against the most powerful Pro-Life legislation from the last legislative session:

“I’m not sure that some parts of this bill were the best decision.” – Susan King