You are at:Home»News»Issues»Abortion»Governor Abbott: Texas will expand investigation into Planned Parenthood in light of today´s video release

Although Planned Parenthood president Cecile Richards promises that her organization “does not profit in any way” from the trafficking of baby parts they harvest in abortions, new evidence suggests that Richards, in fact, is the one spewing untruths.  Governor Greg Abbott quickly followed up today’s new undercover video release with the following statement:

This latest video showing yet another Planned Parenthood senior official negotiating the price of unborn baby body parts is more than just callous and morally bereft, it may be criminal.  The video appears to directly contradict Planned Parenthood’s statement last week that they do not earn a profit for selling body parts.  Today’s new grotesque revelations necessitate that Texas expand its investigation into this abhorrent practice.

Meanwhile, Planned Parenthood is using tiny buckets in an attempt to extinguish a fire that is progressively engulfing them.  They were dubbed, for example, the organization that had the “worst week in Washington” last week.  Meagre efforts to save face, like this one, have all backfired.  Today, in the embarrassing wake of another video release (in which a PP abortionist jokes that she wants to be able to buy a Lamborghini with the profits she collects for harvesting tissue), the organization sent this text message to supporters: 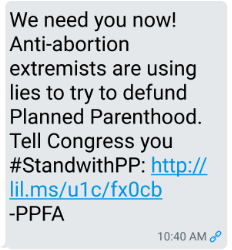 Apparently, the only tactic Planned Parenthood has left in their arsenal is calling video evidence of their own abortionists blathering about their day-to-day operations “lies.”  We don’t expect this to succeed for the abortion giant in the end.  Could this be the scandal that is finally bigger than Planned Parenthood’s friends in high places, bullying expertise, and powers of obfuscation?