You are at:Home»Legislation»Blog»Governor Abbott signs House Bill 3994 into law

Austin, Texas – July 8, 2015:  Today, Governor Greg Abbott ceremoniously signed House Bill 3994 into law.  HB 3994 represents a major Pro-Life victory in the Texas legislature.  The law protects minors seeking secret abortions from the predatory tactics of Big Abortion, ensuring proper reporting of abuse and advocating for the right of Texas parents to be involved in the Life-altering abortion decisions of their young daughters. 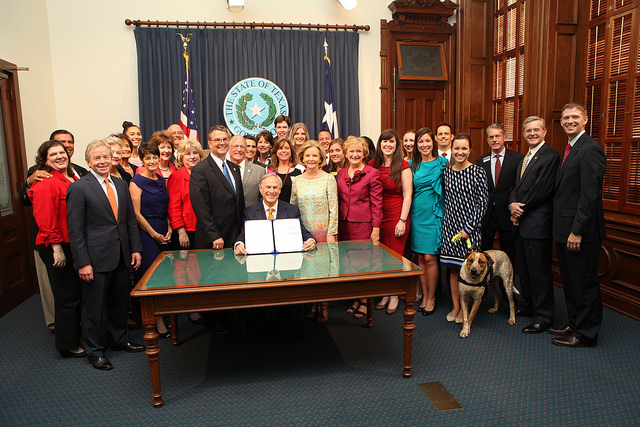 Since 1999, minors seeking secret abortions in Texas have been ushered, by the abortion lobby’s own attorneys, through a loophole-ridden judicial process in order to obtain permission to undergo abortions without parental knowledge, involvement, or consent.  Reforms implemented by HB 3994 will bring the process for minors seeking abortions into conformity with all other judicial bypass processes in the state of Texas.

The law now prohibits attorneys for Big Abortion from cherry-picking their judges and refiling denied petitions in neighboring counties.  The law also requires abortionists and judges to report any suspicion that the minor may be a victim of physical or sexual abuse – which evidence suggests is disturbingly common among teens seeking or being forced to seek secret abortions.

Finally, HB 3994 fixes a loophole that automatically grants the bypass after two days, if the petition is unanswered by judges.  Now the law requires judges to examine the facts and rule whether undergoing an elective abortion without any parental involvement is in the best interest of the minor.  Like House Bill 2, the Pro-Life Omnibus Bill of the 2013 legislative session, the reforms instituted by HB 3994 reiterate two crucial messages.  Firstly, HB 3994 affirms Texas’ commitment to protecting women’s health and security – especially when threatened by the dangerous tactics of the profit-driven abortion industry.  Secondly, the new law reiterates that Big Abortion’s tenure as an untouchable, acceptably sub-standard branch of “health care” has come to an end in Texas.

HB 3994 was championed by committed Pro-Life representatives and senators, who handily defended the Life-affirming legislation amid an onslaught of Democrat resistance and attempts to affix weakening amendments to the bill.  The bill was ceremoniously signed by Governor Abbott in a celebration with legislators and supporters this afternoon.  Texas Right to Life thanks the supporters, legislators, bill authors Representative Geanie Morrison (R-Victoria) and Senator Charles Perry (R-Lubbock), Lieutenant Governor Dan Patrick, and Governor Greg Abbott – whose united stand for Life made HB 3994 a reality.

Founded in 1973, Texas Right to Life is the oldest, largest, and only statewide Pro-Life organization in Texas.  Recognized as the statewide leader of the Pro-Life movement in Texas, TXRTL works through legislation and education to protect the rights of the unborn, persons with disabilities, the sick, the elderly, and the vulnerable through legal, peaceful, and prayerful means.