You are at:Home»News»Issues»Abortion»Ghost abortions: the untold cost of abortions since Roe v. Wade
Reading Time: 4 minutes

The human cost of abortion is undeniable.  Pro-Life advocates often note the number of preborn babies killed since the 1973 legalization of abortion.  The sum is a staggering 58 million, and the number continues to grow.  In Texas alone, 164 preborn babies are killed by abortion every day.  For every child killed by abortion, there are at least two people, the mother and father, wounded by the loss of a child.

This alarmingly high number is one way of viewing the devastation, but there are other perspectives that speak to the tragedy of abortion in our society.  As Michael Voris of Church Militant’s “The Vortex” explains, in addition to calculating the number of abortions, 58 million and counting, we can calculate the number of people who would be here if not for abortion.  Consider the fact that abortion has been legal in the United States for 43 years, which is so long that some of the girls who were aborted would have children of their own by now if they had been born.  These second generation children are called ghost numbers or “ghost abortions.” 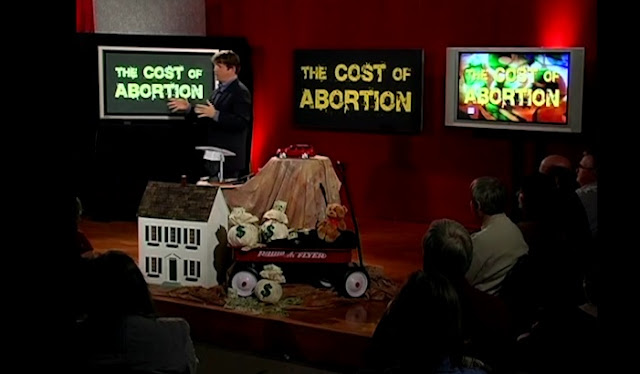 In order to calculate the number of ghost abortions, Voris and his team looked at the number of female babies aborted who would have had their first child by now.  Statistically, women in the United States have their first child by age 25.  That means that female babies aborted between 1973 and 1990, on average, would have at least one child by 2015, had they lived.

How many female babies were aborted between 1973 and 1990?  A shocking 12,700,000.  The children of these nearly 13 million women were never conceived, but if not for abortion they would be part of the total population of the United States, and thus can be counted as missing.   As Voris describes the scenario: “These are…people who can never be considered because their mothers were not allowed to be born.”  Nonetheless, Voris argues, in looking at the total effects of abortion, these missing members of the population must be considered.

Consequently, the total number of Americans who are missing due to abortion is not 58 million, but rather 70 million.  Voris argues that the undeniable personal and spiritual cost of abortion in our country also comes with a real and measurable financial cost.  He and his team demonstrate this economic effect by factoring in Gross Domestic Product per capita, a measurement of the total value of a country divided by the number of people.  This provides a dollar value equivalent per person.  The dollar value averages all the economic activity of the average person, factoring everything from wages, to home purchases, taxes, and food consumption.

Currently, the United States government calculates GDP per capita as $54,000.  In other words, through work, production, and consumption each American contributes an average of $54,000 to the United States economy.  When this economic measurement is paired with the total number of people missing due to abortion, the result is, as Voris describes, “near beyond comprehension.”  If each of the 70 million people who have been aborted or whose mothers were aborted were in the United States population, their economic contribution would be nearly four trillion dollars.

While the economic effect of abortion is by no means the most important consideration, Voris suggests that this little known measurement is important in considering the total effect of abortion.  Paradoxically, each and every year, our federal government contributes hundreds of millions of dollars to Planned Parenthood, an organization that has a business model centered on marketing elective abortion to women.

Given the devastating financial impact of abortion on the United States economy, why does the government financially support the largest abortion business in America?  Of course, abortion activists argue that the money from the government cannot be used to directly pay the costs of abortions, but, as Texas Right to Life has noted many times, the fungible nature of the funding renders their talking point irrelevant.  Our tax dollars do pay for the staff of abortion mills, the electricity that keeps the lights on and powers the vacuum aspirator machines that violently kill preborn children, and countless other overhead costs.

Ghost abortions are yet another demonstration of the devastating poverty incurred by abortion.  The spiritual and emotional costs are certainly of primary consideration in our education and outreach to abortion-minded women, but the economic facts of abortion are also a powerful way to show people that abortion is not a quick fix or a solution.  Abortion robs us of our future.