You are at:Home»News»Issues»Abortion»Fighting for a chance: John Mark and all preborn Texans

More than two months later, Wendy Davis would propel herself into national abortion stardom with her filibuster of Senate Bill 5.  Davis opposed the legislation that prohibited abortion after five months based on the scientific evidence that preborn babies are capable of experiencing pain during an abortion.

Mia then stood in the Texas senate chamber that June night and listened to Wendy Davis advocate for the destruction of babies at the same gestational age John Mark was when he was born.  John Mark, who was fighting for his life in the NICU, was the lucky one because he’d already been born.  The fate of his peers still in the womb hung in the balance as abortion advocates hailed Davis as their late-term abortion champion.

Before Davis’ filibuster, Mia tweeted the following message in support of SB 5:

No doubt in my mind he felt pain at 1 pound 4 ounces #SB5 #txlege #fetalpain pic.twitter.com/R1pXKxdCRP

Senator Hancock has carried Pro-Life legislation supported by Texas Right to Life.  The Texas Right to Life legislative team met with and spent countless hours with Mia working on life-saving legislation before the arrival of John Mark.  As we watched Wendy Davis promote unmitigated abortion and preference for those who commit them, John Mark was never far from our thoughts and always in our prayers. 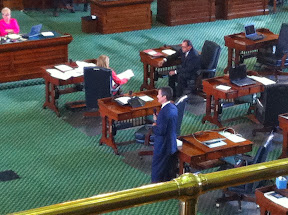 After SB 5 was killed by the abortion-promoting mob, House Bill 2 was introduced.  Right before final passage, Senator Hancock gave an impassioned speech on the floor to honor John Mark:

“These hospital associations and medical physicians that say there’s no such thing as fetal pain would call Mia and ask her to come to the hospital…[John Mark’s] vitals were dangerously high.  They would ask her to simply come to the hospital because the machines weren’t working.  What that baby needed was to lay on that mother’s stomach and feel the love and the touch of a mother.

“When John mark felt that love and felt that touch, skin upon skin, his vitals began to improve.  For weeks and months, that hospital who doesn’t believe in fetal pain did believe the evidence was there and I got to see it personally.  When a mother touches a child the vital signs improve more than an incubator, better than a bunch of machines.”

Senator Hancock, Mia, and the majority of Texans supported SB 5 and HB 2.  They witnessed unruly mobs and the attempts to detract from the issue of protecting innocent preborn Life; yet they were not deterred.

Mia continues to stand for life by sharing the story of John Mark’s entrance into the world.  And Texas continues to rise up for the lives of children like John Mark pleading for a fighting chance to live.