You are at:Home»News»Issues»Abortion»Experiencing this tiny life changed my Pro-Life work

As a Pro-Life activist for several years, I have recognized and sought to protect the dignity of innocent human Life in many ways: volunteering in a pregnancy resource center during college, lobbying for Pro-Life laws, and finding, vetting, and electing true Pro-Life candidates.  In pregnancy resource centers I have witnessed the life-affirming use of ultrasounds – one glimpse of the tiny arms and feet of an 8-week-old preborn baby demonstrating the child’s humanity to his otherwise abortion-vulnerable parents.  During the 83rd Session of the Texas Legislature, I witnessed first-hand the political dramatics, both in public and behind-the-scenes, that had to occur so the strongest possible sonogram law in our nation would become law, a law allowing every pregnant woman in Texas the opportunity to see for herself whether what is housed temporarily in her womb is indeed just tissue, or rather, a living, tiny, separate human being.

But then I became pregnant.  And then I saw an ultrasound of my 8-week old baby. 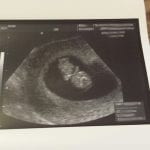 The experience was surreal.  Because the monitor was facing away from me initially, I heard my mom and sister’s squeals before I was able to see my baby.  After asking the doctor to turn the monitor closer to me, sure enough, there was my child’s fully formed body – including two little arms and legs just kicking and wriggling around.  Housed in my belly, with no outward, physical signs of his or her existence, we could still observe the growth of this tiny human.  How utterly incredible.  And crazy.

Talk about a renewed commitment to your work!  Because of a separate human being who needs me in order to grow, I find myself making changes I do not particularly enjoy – abstaining from certain foods and beverages, postponing that awesome trip we planned, and forcing down awful prenatal vitamins daily, to name just a few.  However, I have no right to endanger this other human simply because his or her existence causes inconveniences.  Our abortion accepting culture has been cultivated, in part, due to our society’s increased reliance on “convenience” and a thwarted sense of “independence.”  Sometimes, life just isn’t about you.  And that’s okay.

Being blessed to carry and care for a child, no matter for how long, is life-altering, amazing, and nerve-wracking, all at once.  Which is okay, because sometimes, life isn’t just about me.