You are at:Home»News»Issues»Abortion»Desperate for dirt: Planned Parenthood hires stalker to follow Center for Medical Progress director

With the release of countless hours of damning video footage – and more to come – the Center for Medical Progress has done irreparable damage to Planned Parenthood.  And the abortion behemoth is not happy about their newly-besmirched reputation.  Enter Lynda Larsen, a private investigator hired by Planned Parenthood to stalk CMP Director, David Daleiden, and his family and friends (because how else is Planned Parenthood supposed to spend the exorbitant $540M bequeathed to them out of your pocket every year?).

Daleiden wrote about the private investigator on the Center for Medical Progress Facebook page last night. 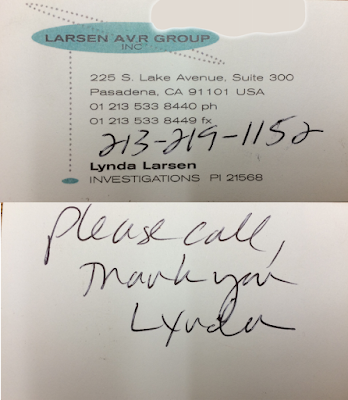 Lynda Larsen is the president of Larsen AVR Group, Inc., according to her LinkedIn profile, with a background in reporting and investigation.  Daleiden has almost single-handedly placed Planned Parenthood’s massive government funding in serious peril with his group’s stomach-churching investigation into the illegal trafficking of body parts from aborted children that goes on within Planned Parenthood and the abortion industry at large.

Planned Parenthood CEO, Cecile Richards, did a poor job defending her indefensible organization last week at a Congressional hearing in Washington, D.C., during which she was grilled on the manner in which Planned Parenthood utilizes the mega-millions that are funneled into the abortion giant every year.  The abortion business was scrutinized for the outrageous cost of travel incurred (with tax documents allegedly revealing private chartered aircrafts and first-class travel), a conspicuous absence of comprehensive breast cancer screening (aka mammograms), and an overwhelming drop in preventive care occurring in conjunction with a staggering uptick in abortions committed by PP.

Hiring a P.I. to dig up dirt on Daleiden bespeaks Planned Parenthood’s desperation as they face the threat of losing your coveted tax dollars.  Hiring a P.I. also suggests that the abortion conglomerate has played all of their viable cards and has stooped to deflecting the bad press by looking for something ugly in Daleiden’s life that may serve as a temporary smokescreen behind which to hide their own despicable actions.  Time seems to be all that’s left standing between the CMP and the downfall of Planned Parenthood.