You are at:Home»News»Deafening silence follows stabbing massacre at Japanese home for people with disabilities

Early in the morning on July 26, Satoshi Uematsu crept into Tsukui Yamayuri En, a care facility in his Japanese neighborhood where people with disabilities lived.  Uematsu tied up at least one employee before systematically stabbing nineteen residents of the house to death as they slept.  The act was premeditated; in fact, Uematsu delivered a letter detailing each step of his plan to Japanese officials months before carrying out the massacre.  What is publicly known of the investigation thus far suggests that Uematsu followed his outlined plan with chilling precision.

Uematsu traveled to Tokyo in mid-February to personally deliver the handwritten letter stating his intention to exterminate disabled people, including his plan to attack the residents at Tsukui Yamayuri En.  The letter stated, “I am able to kill a total of 470 disabled people.” 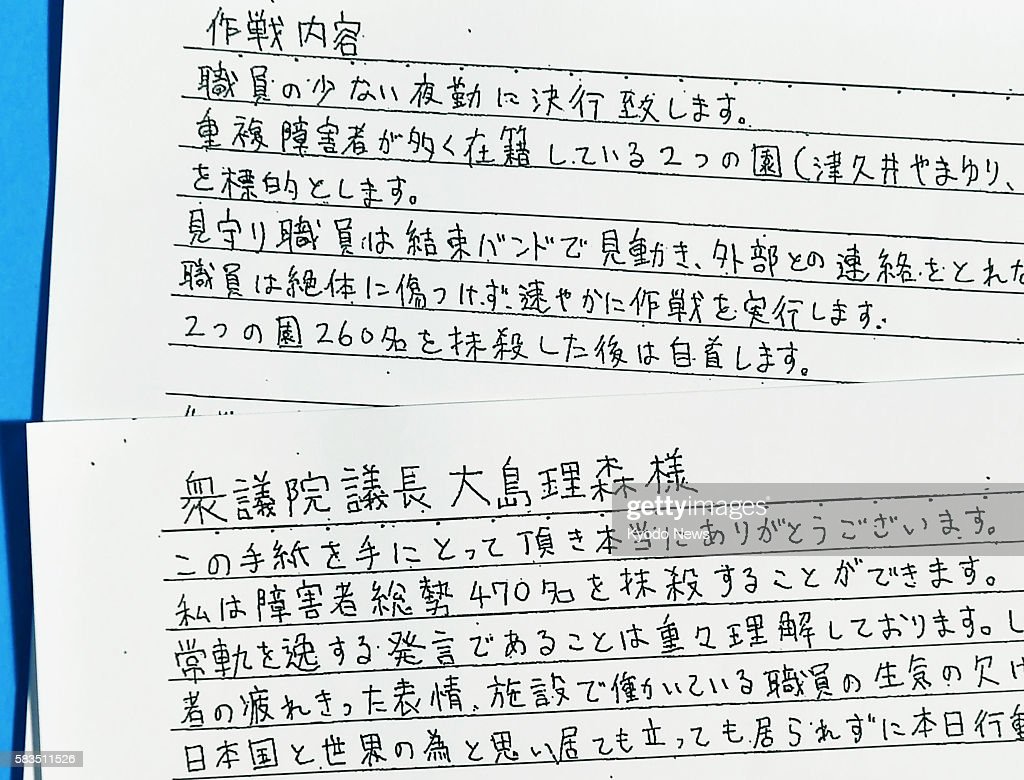 The tragedy is believed to be the country’s biggest massacre carried out by one person since World War II.  The neighborhood and the country grieved the lives lost, yet in the wake of the massacre, two questions have no reassuring answers.  First, why was Uematsu permitted to carry out his premeditated, declared plan?  And second, where is the international outrage?  The answers to these questions bespeak chilling truths about the country’s – and the world’s – view of people with disabilities.

Australian disability rights activist Carly Findlay penned a response to the horrific incident.  Findlay attempted to address the dearth of media coverage of the tragedy and said that a string of ISIS attacks around the same time, coupled with Japan’s view of disabilities as “shameful,” may have contributed to the story being buried in international news.  Still, between the premeditated nature of the attack, the sheer number of victims, and the fact that the slayings were hate crimes against the disabled, lack of media attention is a story in and of itself.

Hampering international spotlight on the attack is the fact that the victims have not been individually memorialized for the public.  In fact, their names have not even been released by local police, who cite the preference of victims’ families for their decision.  Philip Brasor of the Japan Times News reports:

“[T]he families feel that they don’t want the names released…”  There is only one way to interpret this one-off policy: Families of the victims don’t want the public to know that their loved ones have disabilities.  On the surface, the move comes across as a means of protecting privacy, though it can also be seen as a way of keeping people with disabilities out of the public eye.  The Sankei Shimbun reported that at least 10 disabled support groups signed a letter addressed to the Kanagawa police, objecting to its decision.  One person with disabilities told the newspaper that she believed a friend of hers might have been a victim but couldn’t find out since names were not provided.

Victim identification puts a human face on otherwise nameless, faceless individuals who lost their lives.  After Orlando’s June night club massacre of 49 people, some media outlets went to great lengths to memorialize the victims as individuals.  In so doing, America received a glimpse of the people who died – and whom the world lost that day.  Media are unable to put a human face on the disabled people who died at the hands of Satoshi Uematsu.

While a national sense of shame regarding the disabled may infect Japan disproportionately, the global situation for disabled people is not much brighter.  According to Findlay, people with disabilities spend their entire lives at greater risk of violence, abuse, manipulation, and coercion than other people.  In fact, Findlay says that most of her friends with disabilities have been told they should kill themselves.  “I’ve even been told this on a date,” she says.

We will continue to fight for the day when all Lives are valued as equal and dignified.  Every person deserves to be welcomed by the human family regardless of sex, race, religion, ability, socioeconomic status, size, or location (inside or outside the womb).  Join us in praying for the families of each of the nineteen victims of this violent hate crime.  We may not know their names, but we know they are precious in the sight of the Lord.