You are at:Home»News»Issues»Abortion»Couple seeking to adopt babies vulnerable to abortion makes big impact

A Kentucky couple struggling with infertility recently decided to pursue adoption in hopes that they will soon become parents.  Seeing the inhumanity with which aborted children are treated at Planned Parenthood played a role in the couple’s approach to adoption.

Kevin and Nicole Cook understand the feeling of wanting more than anything to be parents.  Witnessing the callous torment to which children inaccurately deemed “unwanted” are subjected every day in abortion mills, the couple decided to pursue the adoption of children who would likely otherwise be aborted.  Kevin and Nicole have an open heart, while the children of mothers in crisis need an open heart; the match is self-evident.  Kevin describes how he felt when he saw the fourth video released by the Center for Medical Progress:

When I watch the despicable horrors of these videos being released about Planned Parenthood and their profiting from the sale of fetus organs, it doesn’t break my heart… it completely shatters it.  Thousands of women each day choose to have their unwanted children killed rather than born, and we are sitting here praying and hoping each month that God would finally answer our cries and bless us.

Kevin makes the astute observation that Planned Parenthood’s callousness towards preborn Life is exponentially more despicable when one observes the organization’s abortion-to-adoption ration: “No wonder only 1,880 women ‘chose’ an adoption referral in 2013 compared to the 327,653 abortions performed by Planned Parenthood that year,” Kevin said.  “That’s 174 to 1!  That’s just under 900 deaths per day; 900 heartbeats that were forcibly stopped; 900 futures that would never be known; 900 souls that never got to love.”

Kevin is right – those numbers come directly from Planned Parenthood’s annual report.  Planned Parenthood – claiming to stand for “choice,” seems to be interested in only one choice: the abortion choice, which will bring in the most cash.

The response to Kevin and Nicole’s message has been overwhelming.  Hundreds of women have messaged the couple expressing agreement and support of the adoption message.  Many women have contacted the couple about potentially placing adoptive children with them.  And the impact of the message could have reverberating effects which go far beyond the Cook family.  Imagine: What if every couple seeking to adopt pursued children targeted by the abortion cartel?  What if every pregnant mother knew that there was a “Kevin and Nicole” out there, ready to love their child and provide for him or her?  The Cooks, who have a crowdfunding page to help with their adoption expenses, decided not to ask “What if,” and instead took to the sidewalks outside of an abortion mill with their simple message of hope: 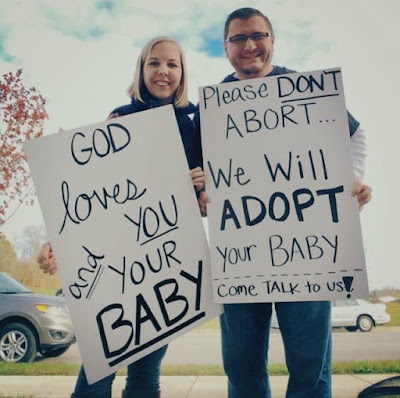 What do you think about this story?  Would you ever consider adopting a child who may otherwise be aborted?