You are at:Home»News»Issues»Bioethics»Bishop Rene Henry Gracida responds to attacks against Texas Right to Life

The issue deals with our determination to protect Life of the infirm without exception.

Too many hospitals and medical associations want to keep their friends in Austin and we stand in the way. In fact, we have reason to believe that the lobbyist for the Texas Medical Association authored these attacks himself. 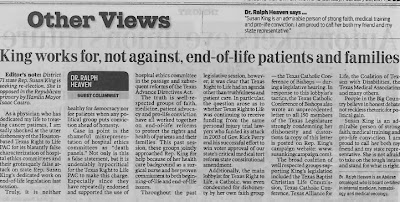 We hope you will read Bishop Gracida's response below.

I write in response to Dr. Ralph Heaven’s “editorial” lauding Representative Susan King while misrepresenting Texas Right to Life’s policies.  In his attack, the doctor defended King’s efforts to reform the Texas Advance Directives Act (TADA) through HB 1444 (the companion was SB 303) during the 2013 83rd Texas Legislative Session.  Absent from his editorial was any substantive discussion of what TADA is and how SB 303 would have impacted patients with critical medical issues.  Dr. Heaven failed to mention that SB 303 was recognized as a setback to current law by many knowlegeable persons, rather than an improvement, and he omitted King’s votes opposing parts of HB 2, now considered by many the most comprehensive, recent pro-life law in our nation.

TADA authorizes doctors and hospital-appointed committees to deny life-sustaining treatment, including nutrition and hydration, to patients against their wishes.  The statutory process, found in Chapter 166.046 of the Texas Health & Safety Code) forces patients and their families to defend their right to make their own medical decisions and their right to life before this committee that is moving to deny treatment.  After the decision to deny and withdraw treatment is finalized, the patient/family have only ten days to transfer to another facility that will provide the needed care.  There is no judicial recourse to challenge the committee’s decision, and doctors and hospital administrators are disproportionately shielded from lawsuits.

HB 1444/SB 303 offered 4 additional days to transfer, but those extra days served as a distraction to the more troublesome provisions in the so-called reform bill, which actually broadened the application of the statute by giving the hospital panels more power over the lives of patients.  Dr. Heaven (and others) criticized Texas Right to Life for using the term “death panel,” but “ethics committee” is hardly appropriate for an unelected, body of colleagues who are making death decisions—or perhaps more precise: decisions that will speed the patient’s death by denying medical treatment.

16 state and national organizations, and I, joined Texas Right to Life to oppose HB 1444/SB 303 (as did the majority of Pro-Life House members); thus, the legislation did not pass before the procedural deadlines. Those who opposed the bill in public testimony outnumbered those in favor by 4 to 1, and many of those opposing were families of patients who have been victimized by the imbalance of power in the statutory process.

The state’s largest, Pro-Life organization, Texas Right to Life, can defend itself, but let me state here that non-profit organizations are responsible to their grassroots membership to make known the actions of legislators, and whether such actions are for or against the organization’s goals and values.  The mailer to which the doctor referred was just that and sponsored by Texas Right to Life’s Political Action Committee.  The mailer clarified the dangers of King’s HB 1444/SB 303 and noted King’s opposition to stricter regulatory standards at abortion clinics plus her desire to remove all doctor and clinic regulations from HB 2.  Her sentiments against HB 2 were vocalized on the House floor in remarks that are now a part of history in the official Journal of the Texas House of Representatives.

Dr. Heaven said that the director of Texas Right to Life was condemned by “her own faith group” during the hearing on SB 303.  The entire legislative hearing can be watched online, and that condemnation never happened.  Additionally, the Texas Catholic Conference of Bishops has no canonical authority or official status in the hierarchy of the Catholic Church, and as the political advocacy arm of the bishops of Texas, the TCC is not the magisterial arbiter of moral doctrine in Texas (or elsewhere), nor does TCC hold any authority over individual Catholics.

Dr. Heaven may have taken his cues and talking points from the pro-abortion Texas Medical Association (TMA), a lobbying group that has achieved a 12-year history of opposing any and all pro-life legislation.  TMA’s positions are public record—as are the witness lists for Governor Perry’s tort reform passed in 2003 to which the doctor fabricated Texas Right to Life opposition.  Texas Right to Life was not involved in tort reform in any way, neither for nor against.

Dr. Heaven opened his vituperative commentary with:  “Truly, it is neither healthy for democracy nor for patients when any political group puts conviction ahead of honesty.”  It seems to me that Dr. Heaven may need to look behind the curtains of the King home and the TMA to see how high honesty and conviction rank.