Earlier this year, New York’s Governor Andrew Cuomo shocked the nation by signing one of the most horrific and barbaric abortion bills in the country into law.  New York already had one of the highest abortion rates in the country, but that was not enough for Cuomo and the radical abortion mob that backs him.  They wanted abortion on-demand up to the moment of birth for virtually any reason.  And that is now the law in New York.

For people who have been following Cuomo, his decision to sign one of the extreme abortion bills in the nation was not a surprise.  The abortion lobby has been pushing Cuomo to make New York the abortion capital of the world for years, as Live Action has reported.  Cuomo is so radical that he views anyone who supports the Right to Life of the preborn as a threat to the very identity of New Yorkers.

In 2014, Cuomo told the Capitol Pressroom that Pro-Lifers are not welcome in New York.  Speaking of conservative Republicans who respect the Right to Life of every human being, including the preborn, Cuomo said, “They have no place in the state of New York, because that’s not who New Yorkers are.”

Cuomo’s comments, like the shocking abortion bill he signed this year, are completely out of touch with millions of Pro-Life Americans who value Life at every stage and do not think that killing a woman’s child is a way forward for her or our culture.  Cuomo represents the most extreme abortion activism in our nation—backed by the powerful abortion lobby, Cuomo has successfully legalized the killing of babies even moments before birth.

In the face of such evil, many Pro-Lifers feel they must respond, but they don’t know how.

What can YOU do?

Now, you can send Cuomo a message: Give a memorial gift today honoring the babies of New York killed by abortion because of Cuomo’s inhumane legislation.  Texas Right to Life will then send Cuomo a note on your behalf informing him that lives are being saved in Texas as we continue to establish a Culture of Life.  His abortion extremism has not stopped Texas from advancing Pro-Life principles; he has strengthened our resolve. 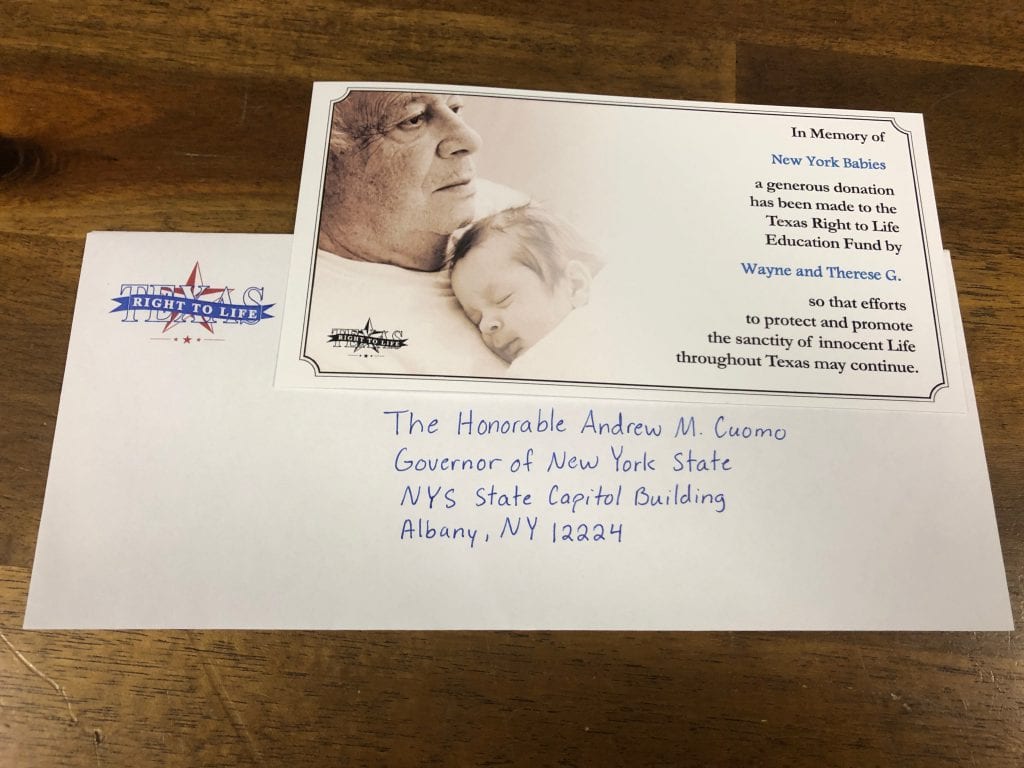 Pro-Lifers may not be welcome in New York, but neither is Cuomo’s pro-death extremism welcome in Texas.  Cuomo’s decision to legalize barbaric violence against New York’s most vulnerable has opened many people’s eyes to the seriousness of our cause.  The abortion mob long hid behind the mask of “choice” and “safe, legal, and rare.” With the brazen display of pro-abortion extremism in New York, Pro-Lifers can no longer ignore the evil of abortion in our country.  The abortion mob is not about “choice,” and they will not stop until they have destroyed respect for Life in every community in our great nation.

What happened in New York affects us all.  Likewise, what we are accomplishing in Texas sends a strong signal to the ruling pro-abortion elites in New York that Pro-Life America will not accept defeat.  Human lives are at stake; we will not surrender.

Send Cuomo a message; give today.