Texas has 17 operational abortion mills.  Eight of those are licensed as ambulatory surgical centers (ASCs), and nine are licensed as abortion facilities.  ASCs are held to higher health and safety standards than non-ASCs, but last year’s round of state inspections reveals that health and safety are not highly prioritized at any Texas abortion mills.  In fact, 16 of Texas’ 17 abortion mills failed state inspections, but inexplicably remain in business.  And – unsurprisingly – Planned Parenthood and Whole Woman’s Health facilities are among the worst offenders

In Texas, Ambulatory Surgical Centers and Abortion Facilities are required to submit to annual inspections. However, they do not appear to be required to pass the inspections in order to be licensed or have their licenses renewed.

Facilities are required to submit a plan of correction, but of the 17 inspection reports obtained by Operation Rescue, there is no evidence that any follow-up visit ever took place to ensure the often egregious violations were ever corrected.

The inspections took place from August 2015 to June 2016.  Records were obtained from the Texas Department of State Health Services via a Freedom of Information Act request by Pro-Life leaders at Operation Rescue.  The inspection documents reveal that clinic sanitation, infection control, and policies and training regulations were the most abused areas of clinic regulation.  Drug handling, proper record keeping, and patient care were other areas of massive failure for the Texas abortion industry, leaving countless women at untold risk. 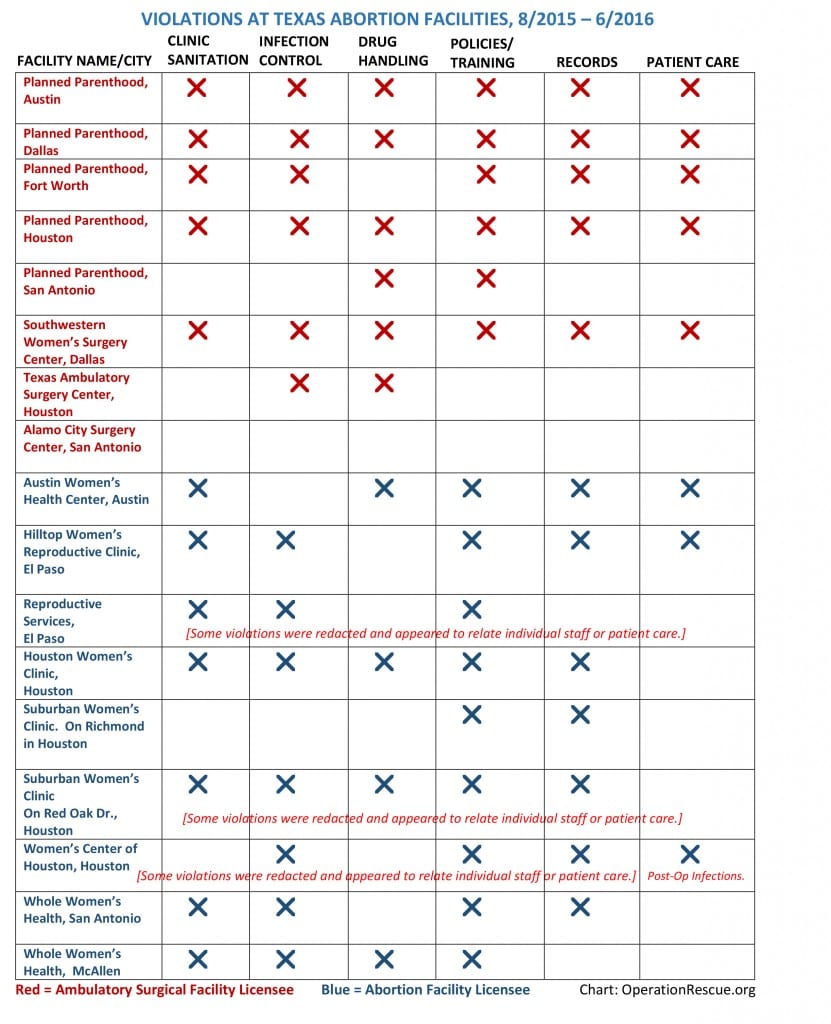 One of the most ubiquitous violations among Texas abortion mills was improper sanitization of surgical abortion instruments.  Proper use and testing of the autoclave did not occur in most Texas abortion facilities, leaving women vulnerable to infection from cross-contamination.  “As evidence that such infections occurred,” reported OR president Troy Newman, “at least one facility, the Women’s Center of Houston, was cited for the way they handled post-operative infections, which appeared to occur on a regular basis.”  That abortion mill was the Houston Women’s Clinic, whose ironic motto is, “Quality You Deserve.”

The Austin Women’s Health Center egregiously failed to report the suspected child abuse of a minor patient and failed to satisfactorily complete Department of State Health Services forms used for the state-mandated reporting of child abuse.  Previous investigations have revealed that, as long as someone pays for a child’s abortion, what happens to a sexually abused child is of little concern to abortion mills across the nation.  For an untold number of young girls, this means being sent back into the arms of nefarious abusers.

These reports add to legion evidence that the Texas abortion industry is nothing more than a profit-driven enterprise capitalizing on the deaths of tiny Texans and the betrayal of their mothers.  The quickly-approaching legislative session will provide Pro-Life Texans with an opportunity to shine a light on the filthy Texas abortion industry and pass legislation that protects women and reduces the abortion rate.  Read Operation Rescue’s full report here.