You are at:Home»News»Issues»Abortion»38 years after legalized abortion

January 22, 2011, marks the 38th anniversary of Roe v. Wade.  In 1973, the Roe v. Wade and Doe v. Bolton court decisions legalized abortion on demand in America.  Since then, women have legally terminated their pregnancies throughout all nine months for any reason.  However, on April 18, 2007, the U.S. Supreme Court finally upheld the Partial-Birth Abortion Act.  This was a monumental step for the Pro-Life movement.
Chuck Colson of BreakPoint commented, “It took thirty-four years to get from Roe v. Wade to the first significant restriction of so-called ‘abortion rights.’  It’s a reminder that when it comes to eradicating social ills, we must never give up.”  He went on to compare this victory with British Parliamentarian William Wilberforce’s victory in slowing the British slave trade.  His victory came when he was able to pass legislation in 1788 that restricted the number of slaves that a ship was allowed to carry based on the ship’s tonnage.
This victory, although small, proved that the slave trade was vulnerable, just as our victory against partial-birth abortion proves that the abortion industry is vulnerable.  Mr. Wilberforce, after almost 20 years of fighting, was eventually successful in abolishing the slave trade.  Twenty-five years after that, slavery was abolished all together.  We too—with patience, prayers, hard work, and diligence—eventually will be successful in abolishing the practice of abortion.
Pro-Life efforts saving lives in Texas
Abortion saw a spike in 1990, and, in Texas, the number of abortions has dropped steadily since then.  Pro-Lifers attribute this decline to educational outreach, legislative progress, and hard work.  However, other factors must be considered as well.  Simply determining the difference between abortions in 1990 and any given year is not sufficient.  For example, there were 89,016 abortions in 1990 and 87,680 abortions in 1991.  It would seem that Pro-Life efforts saved 1,336 babies in 1991.  However, this is not the true number of lives saved.  What if there were 1,336 fewer women in Texas in 1991?  What if there were 1,336 fewer pregnancies in Texas in 1991?  And that is the key point.  One must consider the number of abortions in relation to the number of pregnancies; this is called the abortion rate.
The chart below shows two different figures: 1) the total number of lives saved since 1990 based on the raw decrease in numbers and 2) the total number of lives saved since 1990 based on the abortion rate. 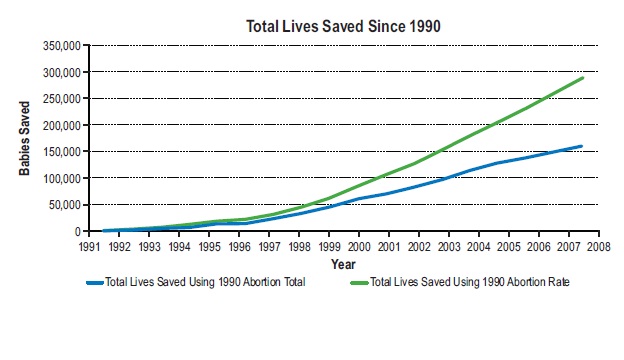 This graph is quite remarkable.  It shows that the efforts of the Pro-Life movement in Texas have actually had a much greater effect than previously thought.  If we simply subtracted the number of abortions each year from the 1990 total number of abortions, we would determine that 160,223 lives were saved over this 18 year period.  While this is already extraordinary, when we use the 1990 abortion rate to calculate the true number of lives saved, we find that we have actually saved 287,868 lives.  That’s incredible!  That means that Pro-Life efforts were saving an average of approximately 44 babies in Texas every day from 1990 to 2008.