You are at:Home»News»10-Day Rule invoked after mother suffers tragic miscarriage

Kalilah experienced pain and swelling in her legs during pregnancy and visited an ER numerous times.  Staff dismissed her complaints. After the third or fourth visit, the hospital finally discovered blood clots in her legs and admitted her.

Tragically, however, Kalilah’s baby died during an emergency C-Section because her complications were initially ignored.  Kalilah suffered a pulmonary embolism and experienced respiratory failure during the operation.

Despite severe complications, Kalilah persevered and began to improve.

Just one month later and just days before her slated discharge, Kalilah went into cardiac arrest because her trach tube fell out and went unnoticed for twenty minutes, leaving her without oxygen.  (This incident is noted in the medical record.)

Soon, Kalilah’s family discovered that the caseworker wrote in Kalilah’s records: “[A]ll life-sustaining treatment will be withdrawn once the mother arrives from California” against the family’s will.

Her mother had made clear to the hospital that she did not want care withdrawn and that she was traveling to Texas to make her wishes known.

Kalilah was in a minimally conscious state but not brain dead.  Her mother believed her daughter’s life would end on God’s time, not a hospital committee’s.

The hospital threatened the 10-Day Rule, forcing Kalilah’s family to race against the clock.  Her mother fought for more time through the court to save Kalilah’s life and transfer her to another facility.

The judge ordered the hospital to participate in weekly conference calls with Kalilah’s mother, with Texas Right to Life (her patient advocates), and the legal counsel to update everyone on transfer attempts and Kalilah’s progress.  The hospital seemed to develop new interest in caring for Kalilah as she was weaned from a ventilator and achieved other benchmarks. Despite the judge’s orders, the facility continued to obstruct the transfer process and withheld information from Kalilah’s mother. 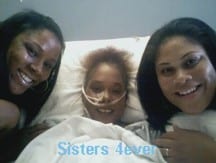 By the grace of God, Kalilah was eventually transferred to a skilled nursing facility in Lubbock, where she lived for another five months – five precious months loved ones cherished with Kalilah that the 10-Day Rule nearly denied.

The Texas 10-Day Rule allows hospitals to pull the plug on patients against their will – a form of involuntary euthanasia.  Senate Bill 2089 by Senator Bryan Hughes (R-Mineola) would have protected these Texans from the 10-Day Rule in the Texas Advance Directives Act.